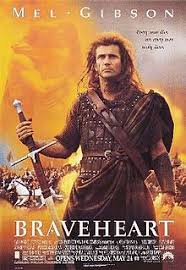 “Wait a minute!” you say, “Braveheart doesn’t star a royal! It stars a commoner!” And yes, this is true. On the other hand, it does have a couple of kings (Edward I and Robert I), a prince (to-be-King Edward II) and his wife (to-be-Queen Isabelle) in prominent antagonist and occasional co-protagonist positions. It totally counts!

We’re in Scotland in the 1200s. Young William Wallace (James Robinson) loses his dad when the father goes off to fight the English. His uncle (?) takes him away to be educated, and learn things like Latin, and when he’s all grown up, he (now Mel Gibson) returns home, wanting to settle down and start a family. Preferably with childhood sweetheart Murron (Catherine McCormack).

To cut a very long story considerably shorter, Murron is killed by the English, and Wallace is so angry about this that he finally decides to take arms against the English and try to win Scotland back. King Edward I (Patrick McGoohan) doesn’t take kindly to this, but then again he also doesn’t take kindly on his wimp of a son, Prince Edward (Peter Hanly), no matter how good an idea it was to marry him off to Princess Isabelle of France (Sophie Marceau) … who also finds Prince Edward lacking.

Lots of bloody battle scenes and great landscape shots of the Highlands ensue. At least I hope those are the Scottish Highlands and not something that’s pretending to be them, because that would well and truly suck.

Also starring Brendan Gleeson as Hamish, David O’Hara as Stephen the Irishman, Angus Macfadyen as Robert the Bruce, and Alun Armstrong as Mornay.

I remember Braveheart as a pretty good film. The IMDb Top 250 certainly seems to think so – it’s #83. But re-watching it again for the first time in years, two things strike me:

Mel Gibson won awards for his work as a director, and sure, I guess it’s a well-directed film. It’s not badly acted either, but Gibson doesn’t convince me. He doesn’t ever become William Wallace, he’s just Mel Gibson in a kilt who’s trying to free Scotland in the most melodramatic way possible. (When he’s brought into the courtyard near the end, you can’t fail to see how he’s trying to put across the message that he’s some sort of Scottish Messiah. The symbolism is so blatant even I went “ooooookay then”.)

“But it’s a very good film!” you cry, and sure, it’s not a bad film by any means. I just remember it being a lot better than this. There’s an awful lot of faffing about, and while we need some of that as exposition to explain the plot, it’s still … faffing about. For instance, it takes a good hour before Wallace is in any way inclined to take up a sword against the English, which is what he’s known for. An hour.

When he does finally start to fight back, there are drawn-out battle scenes, just so that we’re on the clear that people were willing to fight to the death for their cause. Which is all well and good, because yes, freedom is very important. But the battles are just slightly too long to make that point before moving on, and that’s where it goes into the self-indulgent territory.

You know how some people seem to wallow in misery? Braveheart wallows in itself. “Look at me, I’m so righteous and worthy!” And it’s almost, but not quite, entirely historically inaccurate, to boot. Maybe it’s because I’m not too keen on Mel Gibson, maybe it’s because I question why they couldn’t get an actual Scotsman to play the part (money troubles, apparently) as opposed to an Australian born in the United States (or an American who grew up in Australia, depending on how you want to look at it) who can’t even seem to get the accent right a lot of the time.

If anything, the William Wallace song from Horrible Histories is probably more historically accurate than Braveheart. And in a lot of ways more enjoyable. But I digress.

To sum up: too long and too self-indulgent, but not a bad film, really.