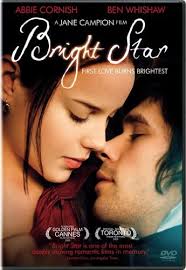 Bright Star chronicles the love story between the fashionable Fanny Brawne (Abbie Cornish) and poor poet John Keats (Ben Whishaw). Keats and his friend Charles Brown (Paul Schneider) live in the other half of the Brawne family’s house. (Kerry Fox as Mrs Brawne, Edie Martin as Toots and Thomas Brodie-Sangster as Samuel, with Antonia Campbell-Hughes as Abigail the housemaid)

After reading some of Keats’s poetry, Fanny becomes interested in the poet himself, and eventually manages to get some poetry lessons from her. She tries ever so hard to flirt with him, but he’s more cautious, considering he has no hope of ever securing her hand in marriage, being a pennyless poet and all. But yet, they do their best and eventually fall in love.

Of course, that doesn’t mean it’s plain sailing and happily ever after.

I watched this film because it was a period drama, and set in the 1800s to boot (John Keats lived 1795-1821). It’s a story about love that may or may not be requited and it’s actually more melancholic than romantic. After all, even if Keats was interested in marrying Fanny, he hardly had a penny to his name, and if he doesn’t have any money, he really can’t be allowed to marry her, because obviously, her family doesn’t want her to live in squalor.

A testament to the time, I suppose, and not a very happy one. The acting is top notch, and it’s a well done film, but I’m not particularly taken by it, to be honest. Men in cravats is always a plus, and it’s a film well worth watching, but it’s a little too gloomy for my liking.

The problem with biopics is that – like life – they’re not guaranteed to come with a happy ending. This is not fwuffy romantic comedy territory, it’s the story of someone’s life. If that life didn’t end with a wholly holy happily ever after, the film won’t either. It’s admittedly spoilery, but you only need to read the Wikipedia entry on John Keats to know how the film ends. Eh, especially since the film specifically says it’s about the last three years of his life.

But until then, it’s a charming look at times gone by, which isn’t seen through the same rose-tinted glasses that Jane Austen had …