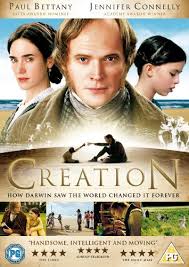 Charles Darwin (1809-1882) came up with the theory of evolution, which we all take for granted today in educated and/or secular society. (Jibe intended. Get over it.) We might not know that much about how he came up with it, or anything about his life, and that’s where Creation helps us out.

Charles Darwin (Paul Bettany) travels around the world, seeing the Galapagos Islands and wherever, on a ship captained by Fitzroy (Ian Kelly). He comes back to Britain and his wife, Emma (Jennifer Connelly), and tries to write a book about his obsession for natural history, but it’s not easy. His friends try to make him put his revolutionary ideas forward because people need to hear them, but his own religious beliefs are severely challenged and he becomes indecisive and procrastinates a lot. Will the book ever actually be written?

And that’s sort of the film. Thrown in some very confusing timelines with regards to his daughter Annie (Martha West) and jobs a good ‘un.

My favourite part of the film was the story of the chimpanzee Darwin met in a zoo, despite it being heartbreaking and had me in tears. It was beautiful and poignant at the same time. Perhaps we’re not so very different after all, eh?

Creation is, if you pardon the groanworthy pun, a star-studded creation and a thoroughly fascinating film about that bearded guy we’ve heard about but never really knew much about. It really is very watchable. Not entertaining, per se, but it’s a film about having an idea that challenges everything you have ever been taught to believe, and not knowing how to respond to that.

The scientist in Darwin needed to get the book written and share his ideas with the world, but the man couldn’t bear facing his own fears about what his theory suggested about his religion. Then again, if you’re religious, you could argue that the theory of evolution doesn’t rule out the existence of a god, because who caused things to evolve in the way they did? Who was the spark of creation in the first place? And who put the ram in the rama-lama-ding-dang? He could’ve taken a chill pill and not worry so much is what I’m saying.

But then again, this isn’t the 1800s. (Sadly, when it comes to today’s lack of cravatted necks.)

The thing that confused the crap out of me were the scenes with his daughter Annie. Was she there, was she not there? There were two different timelines going on at once, and that took me until about act three to figure out. Was she there or wasn’t she there? Is she dead? But she was alive a second ago? What’s going on? That’s my only real criticism of an otherwise enjoyable film.

I sure won’t look at Charles Darwin the same again. Now, I’ll picture him with snazzy sideburns and a cravat, looking like the dashing Paul Bettany, for starters! 😉

4 out of 5 dovecotes, and here’s some bonus material because awesome: