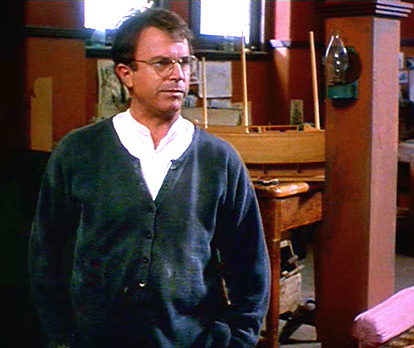 On the train back from work, I saw a guy who seriously looked like Sam Neill. He had glasses and reminded me a lot of this piccy here (from Sirens). Put a smile on my face, that did. Think he got off in Hucknall, so if you look like a ’93 Sam Neill in glasses reading this and live in Hucknall – you rock!

Pixar/Disney have announced a Monsters Inc. sequel, apparently. Don’t really remember the first one, but it was cute…? The One Show‘s resident grumpy Brummie Adrian Chiles is defecting to ITV, gasp! How very dares he! Top Gear will be getting a US spin-off. Well done! Top Gear is a brilliant show. I know it’s about cars, but why watch it for the motors when the guys are hilarious? Not many people would try to make a rocking chair and a blender from a V8 engine… 😉

One American remake that apparently isn’t going ahead at the moment is Torchwood, the Doctor Who spin-off. They were making an American version? What on earth for? I mean, the original wasn’t that brilliant… John Barrowman aside. Loving him! He auditioned for the part of Will in Will & Grace once – he didn’t get it because they thought he seemed “too straight”. Barrowman is homosexual, and he’s rather flamboyant and, well, gay. Instead, the role went to heterosexual Eric McCormack… So how’d they work that one out? There was also something on the BBC site mentioning a Torchwood musical, and that Björn Ulvaeus and Benny Andersson (of ABBA fame) had been attached to it. Please tell me that was a joke! Björn & Benny – yes please. Torchwood musical? Why d’you want to go and do something like that? Because John Barrowman is a singer and a musical actor as well as a handsome TV actor?
Oh, we’ve been watching the V remake, with Inara and Wash from Firefly and Juliet from Lost amongst others. Didn’t see more than a few minutes or so of the original, so don’t have any preconceptions. All I knew was it’s alien reptiles posing as humans, and that’s about it. Oh yes, and the Sci Fi Channel is now Syfy in the UK as well. Sigh. The new Doctor Who is up and running – and it’s looking good! I thought I wouldn’t like the new Doctor, but Matt Smith is really rather enjoyable and Karen Gillan is gorgeous. Even though I loved the tenth doctor, the eleventh isn’t so bad. The first episode cracked me up, when he was trying all the different foods. Fish fingers with custard. I don’t think even my custard afficionado squeeze would be into that.

Lost is progressing at a leisurely pace. Not sure I like the new Claire and Sayid, though. She’s still going on about that blasted baby and Sayid is just… weird. Good thing I’m liking the “new” Sawyer, and that pilot guy is surprisingly dishy. Apparently there’s just three episodes to go before we hit the big finale. Are they really going to be able to wrap up all the big questions in that time? What’s the deal with the Egyptian statue? It’s all still up in the air at the moment. The finale is out in America in a month, with the UK to follow suit.

Guess who were on the front cover of the latest Sky magazine, btw? Richard Armitage and Orla Brady! As it’s the May issue, it has three pages on Strike Back. There were short interviews with both of them.

If I can find the right leads to the scanner, I’ll scan it in. If not, there will be photos, unless someone else scans it in before I get around to it. Richard talks about being exhausted after the training and how he learned how to break someone’s neck with his bare hands – and thinks that’s a bit scary. Aww. It’s basically the stuff that’s not mentioned in the interview on the Sky1 Strike Back site. It also has a photo gallery, and other bits and bobs. OH, SNAP! And wallpapers! 😀 The premiere red carpet gallery has lots of RA pictures as well. Porter mania begins 5 May at 9pm on Sky1.

UK media have reported about the Hitler Downfall meme, because the company behind the film have made a move to remove them off the net. Good luck with that. I’ve actually got Der Untergang, but haven’t seen it yet. Will get around to it at some point.

Et finalement, Sky1 have made another Discworld adaptation: Going Postal, showing in the end of May. I haven’t actually read that book, so it’ll be interesting to watch. Really enjoyed Hogfather and The Colour of Magic; they were very well done, so Going Postal should be a good watch as well.