The Squeee does Heat magazine or something but without stalker-y paparazzi photos. Erm, maybe with the exception of the one below, which I borrowed from the Mirror.

Geraldine Granger and Harry Kennedy would of course live happily ever after, but in real life, news recently broke that Dawn French and her squeeze, comedian Lenny Henry, have split up after 25 years of marriage. Amicable split, apparently, which is nice. None of that mud-slinging à la Katie Price and Peter Andre in the tabloids then, one hopes.
Read more: Comedians Lenny Henry and Dawn French separate (BBC)

Speaking of Peter Andre, he seems like a pretty decent bloke, actually. The little I’ve seen him actually say something on TV. He has come across as a friendly, caring sort of person. His ex wife… ugh. Less said on that subject the better. 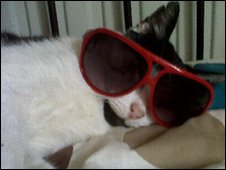 Geriatric Geordie cat attacks three postmen and gets owner’s mail suspended because of it. Aww, bless him. Tiger makes an appearance on BBC’s morning show, and doesn’t seem very attack-prone there. If you’re a 19-year-old cat, chasing some postmen is probably good for digestion. And livens up the day a bit. Amazing that he manages to fit it in, considering he’s only awake about four hours a day…
Read/see more: Leeds postal workers boycott house over cat attacks (BBC)

Oh, and apparently, J.K. Rowling is apparently writing on something new. She’s not ready to reveal what yet, but it’s nice to hear she’s working on something. Wondering what it is. I think she said at some point that she’d like to write a crime drama. Could that be it? We’ll have to wait and see, I suppose.

And today, while waiting for the train back from work (I now work full time – three days in one place, two days in another – for the next few weeks, then I go full-time at the three-day place instead), I had an idea for a book. A good idea. An idea I’ve sort of had in the past, but not in the same way. Now it was a proper idea, not just a loose and flimsy concept. Just need to do some more thinking and some research and stuff, and work out the middle bit (sort of know the start and the ending) and how things fit together. Still, it’s exciting and it just might work! 😀