Wow. That’s all I can say. The series is really just better and better! 😀 Sadly, there won’t be an episode a day this week – it’s just the one, tomorrow afternoon. Oh well, at least we had all of last week to enjoy it. 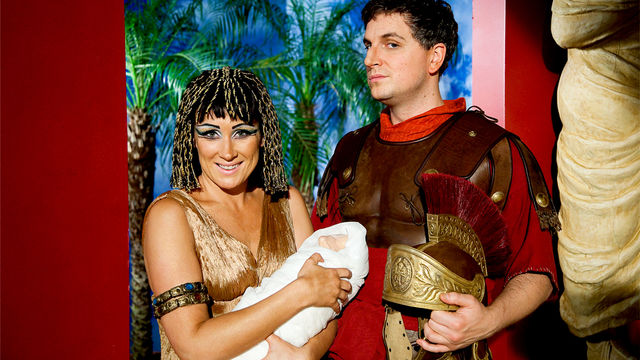 The sketches are of the same high standard as has been seen in the previous three episodes, which I wrote about last week. There have been a few bits from the Frightful First World War this series, and it’s good – it’s a war I don’t know an awful lot about (I’m better with the sequel, so to speak).

And that’s the brilliant thing about Horrible Histories: you actually learn things. It’s not just for “teh lulz” that they’re doing this. It’s educational! And yes, I am (kind of) trying to learn the Ruthless Rulers song from 3.2. I’m up to “William, William, Henry, Stephen, Henry, Richard, John” after a few listens. Singing works, like I said before! And speaking of singing …

The first song of these two episodes feels like it’s from a musical, a bit like Hard Knock Life in Annie, perhaps, and is about how the Victorians used children as cheap workers.

Actually, it’s more Food, Glorious Food from Oliver! I suppose, but I’ve never seen that show (and film?), so Annie is what first came to mind. I love the kids they get on this show, they’re fab. I especially like Bertie Gilbert, his expressions crack me up. I don’t envy him having a Spartan as headmaster, though, I have to say, although it was a very funny sketch. And on a completely different (and “wooohooo!”) note, I saw Gilbert’s been cast in Harry Potter and the Deathly Hallows: Part 2. Before opening the link to see which role he’s been cast in, I thought “oooh ooh, I hope it’s as Draco’s son!” AND HE IS! 😀

The second song is a Lady Gaga parody – starring Cleopatra (Martha Howe-Douglas), queen of Egypt. Not only is the style of song and haircut similar, but the dancing and even the lyrics make Gaga hints. Very well done! And I don’t blame her for fancying them Romans either.

So, all we have to do now is to sit back and await tomorrow’s episode. Meanwhile, enjoy a bunch of behind the scenes clips (UK only) on the CBBC website or see the guys accepting the British Comedy Award for Best Sketch Show earlier this year (starts ca 7:10), and listen to Laurence Rickard’s hilarious acceptance speech. From which I take the parting words, as I feel they can also apply to series three:

It is still at heart a kids show, so if you’re not really, really happy for us … that’s the same as punching a baby.

Came to realise I had seriously high expectations for this series, and they have definitely lived up to them. Really well done and congratulations on a fab show, everyone! 🙂