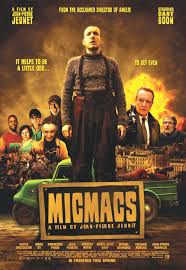 This peculiar film opens with a soldier dying trying to clear a landmine. Back home, his widow and young son try to cope with the loss. Cut to thirty-odd years down the line, and the boy is now all grown up. Bazil (Dany Boon) works in a video rental store and, as luck would have it, takes a bullet to the head.

He doesn’t die, however, but once he’s back out of the hospital, he no longer has an apartment, or a job. He’s taken in by a group of misfits living in a junk yard (Jean-Pierre Marielle as Placard, Yolande Moreau as Tambouille, Julie Ferrier as La Môme Caoutchouc, Omar Sy as Remington, Dominique Pinon as Fracasse, Michel Crémadès as Petit Pierre, and Marie-Julie Baup as Calculette).

While out looking for scrap metal one day, Bazil discovers who were responsible for the landmine that killed his father – and the bullet he has lodged in his head … and he wants revenege. On both companies.

To be honest, the reason why I watched this was because the description said “steampunk revenge comedy”. The person who wrote that description has no bloody clue what steampunk is and thinks just because you have some scrap metal welded together and it moves like clockwork, that makes a film steampunk. Err, not quite?

It is a revenge comedy, though, and boy do Bazil and his team deliver! This was a film I had saved for us to watch together, because hey, it said steampunk. We quickly realised that the film had nothing to do with steampunk at all, but we were intrigued by the quirkiness. By the time the doctors made a decision about the bullet, which is basically right at the beginning, we were hooked. Perhaps because the decision was so unexpected that we both had to pick up our dropped jaws and exclaim “Wait, WHAT just happened?!”

To those of you who would say “I won’t watch it because it’s in a foreign language and I’m so not reading subtitles” – screw you. Unless you’re actually illiterate or have severe dyslexia and therefore physically can’t read (in both cases you wouldn’t be reading this blog, Q.E.D.) there is no excuse to refuse to watch a foreign language film because it’s subtitled instead of dubbed. Dubbing is a nuisance. Unless it’s a film for children, let the actors have their original voices – for better or for worse.

My surviving knowledge of three years worth of French in high school is knowing how to conjugate verbs, but that’s about it. If I was to order something in a restaurant, I’d pretty much have to resort to pointing on the menu and saying “Merci!” and hoping that would work, because “un of those, por favor” sure wouldn’t. Then I’d hope I didn’t order something disgusting by mistake because I couldn’t decipher the menu.

And I still prefer the original French soundtrack in films.

Anyway, I digress as usual. Micmacs is surprising, fun, engaging, nail-biting and very, very odd. But in a good way. If you get a chance to see it, it’s well worth a watch.

4 out of 5 bugged fireplaces.