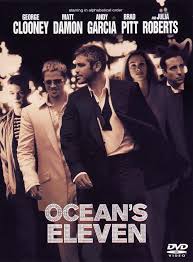 In this remake of a 1960 film, Danny Ocean (George Clooney) has just got out of prison, and he has a plan. He breaks parole and goes to Los Angeles to meet up with friend Rusty Ryan (Brad Pitt) to divulge his ambitious plans: to simultaneously rob three big casinos in Las Vegas. But they’re going to need a little help …

All three casinos are owned by Terry Benedict (Andy Garcia), and who should Danny Ocean manage to find as his girlfriend? Tess (Julia Roberts) – the former Mrs Ocean …

Hitting three casinos at once sounds like it would be impossible, and you do get the adrenaline flowing watching Ocean’s Eleven, because how on earth could they do this and get away with it? Sure, they have a bunch of experts trying to pull off this heist, but breaking into a casino is like trying to break into Fort Knox – it’s just not happening.

When Tess comes into the picture, it complicates matters. Suddenly, it’s more personal, especially since Danny clearly still has feelings for her. Or, you could just see it as they’ve added a bit of romance to keep your interest up. Sort of works.

I like this film. While it’s not one of those films I’d watch over and over again, it’s fun every now and again. Parts are funny, but most of all, it’s intriguing how they go about planning these shenanigans, and whether or not they’re going to get caught. It’s a nailbiter, for all the right reasons, and there’s no denying that you also get plenty of eye candy: George Clooney and Brad Pitt, to name but two! Okay, so George Clooney seems to be pigeonholed into playing the suave criminal who isn’t really a criminal because he’s such a nice guy despite robbing banks. Well, you know, whatever works. This does.

4 out of 5 reinforced vaults.