Sorry I’m late – the polls seemed to not close at 12 in the day, more like… nearly midnight to Wednesday or something last time I looked. Anyway, here are the results. Are you surprised by how people have voted or is it all blatantly obvious? 🙂

Not-so-closely followed by vicar Gerry!
My reaction on seeing this particular scene was “Hey, that’s the same cardigan I’ve got!”
It’s my favourite one too. So I guess I know where she goes shopping. 🙂

Again, not really a surprise… it’s Maggie Hale and John-boy Thornton with the chocolate voice! 🙂

…and again, followed by the voluptuous Dibley priestess!

Ta-da! Not as clear-cut beforehand than I thought. I mean, Marian is THIRD? That’s a bit of a surprise, surely! I thought she’d be at least two, and that the battle would be between her and Sarah, but instead, it’s Sarah and Alona. Go fig! So, in keeping with tradition, here’s a picture… the extended version, you might say: 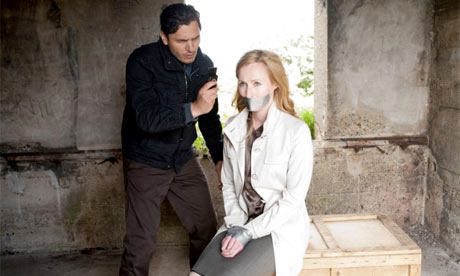 Sarah Cauldron Cauliflower Caulfield, bound and gagged
…not by Lucas, but hey, can’t have it all.
He totally would’ve done it eventually.
Surely.

Here’s one of many grating moments:

And for number two, we’re Alonagain, naturally…
with another grating moment, woo!
Pinned to the wall of shame:

Thanks to everyone who voted! Hope you had fun with the RA Fanstravaganza. Perhaps we’ll have another one next year, if not before? 🙂 Thanks to Nat at RA Fan Blog for the organisation and to Maria at FLY HIGH! for coming up with the idea. It’s been great fun to read everyone’s posts, polls and comments. And thanks to all the other participants, who have their results up as well: