Been busy with stuff recently… and at the same time, not more than usual. Oh well.

On the Squeee front…
Couldn’t help myself, so I’ve started on North & South by Elizabeth Gaskell… Think I’m on chapter six so far, and from sneaking a peak, I think it’s in the next chapter (i.e. 7) where she first encounters dear Thornton.

I’ve watched Jane Eyre ’73 and been ogling some spin-off books on Amazon (waiting to get a voucher to buy them). Also been reading some… I think I’ve read past the shoelace scene. It’s somewhere around when Blanche et al are at Thornfield anyway.

Saw the Heroes and then the Heroines episodes of the documentary Reader, I Married Him yesterday, and for the first time, found myself disagreeing with Daisy Goodwin. Something she was saying about Rochester “marrying a mad woman for her money” had me exclaiming, “Oi! He was tricked into that marriage! He didn’t know she was mad, and he didn’t marry her for the money, his relations made the match for her money, not him!” Soo… anyway… *cough* It was followed up by Seriously Dirty Dancing with the wonderful Dawn Porter. Incidentally, Dirty Dancing was shown on Fiver last night, but I didn’t see it. I do have a bit of a craving now, though. Maybe I’ll get out the DVD to cheer me up, because another program on telly last night managed to get me down. Sigh.

The other night, the movie version of The Hitchhiker’s Guide to the Galaxy was on. It started quite late, so I thought I’d watch it on DVD another day instead. Oh, and I recorded Perfume: The Story of a Murderer when it was on, because my fangirl senses were tingling, but I couldn’t remember who was in it. A look on IMDb the next day reminded me of why – I had seen a picture of a young woman with fantastically red hair next to Alan Rickman. 🙂 So need to watch that.

The new episode of NCIS wasn’t on last Friday, because it had had a week’s break in the US… so they passed it on to us. Thank you, FX, there’s that Friday spoiled. Brothers & Sisters season four is back on More4 on Thursdays, yay! The sixth and final season of Lost starts on Sky1 this Friday (and will clash with NCIS, boo!), and next Wednesday, Supernatural is back (this time on Living). Watched the Caprica pilot earlier in the week, which was okay I guess. It’s the Battlestar Galactica prequel, and I never really watched enough of BG to care, even though I’ve heard it’s supposed to be ace. FX are showing Babylon 5, so been watching a bit of that (I’m loving Sheridan!). Still waiting for Strike Back…

On the home front…
Been busy worrying about my cat and a lump I found on her back. The vet said it’s likely a reaction to the vaccination she got in early January, but to keep an eye on it. I dunno, it’s been a month on Saturday, so I’m wondering if I should book an appointment just to have it checked out. She seems fine other than that, but still. Better safe than sorry.

The hyacinth I got from the Co-op a few weeks back is now in bloom! Three stems, pink and making the kitchen smell all christmassy! I’m waiting for the red amaryllis to burst out in colour as well, but that needs to grow a bit more first. Oh, and Kaylee’s got a flower again, and I have a new orchid as well which has yet to be named. It’s not a phalaenopsis this time, it’s something else. Apparently Lidl had them cheap so the Squeeze got one for me. 🙂

Have almost finished the required chapters of A Very Short Introduction to the Celts, and the way the current part of the psychology course is laid out, I don’t feel inundated with stuff there for once. Yay! I’ve read nearly all I have to for next week, and should get done in plenty of time. Still haven’t had the results from the last exam thing, and I’ve still to hand in two report things which are way overdue. Should start at least one of them, considering it was about analysing a couple of film scenes. Oh, and the new Creative Writing course has started. First task: quote a favourite author, write a bit about their writing, then submit a piece of writing you’ve done which is in their sort of style. Charlotte Brontë is not my favourite writer, but it’s a good excuse to try on her style of writing, which is very different from my own.

Beh. This post is so depressing I’ll make up for it by over-compensation: Which reminds me, I have to watch Hellboy II now that we have it on DVD.

Next one’s a fit bloke with with a cute puppy… gotta have one of those! There needs to be a cravat crupet as well, of course: 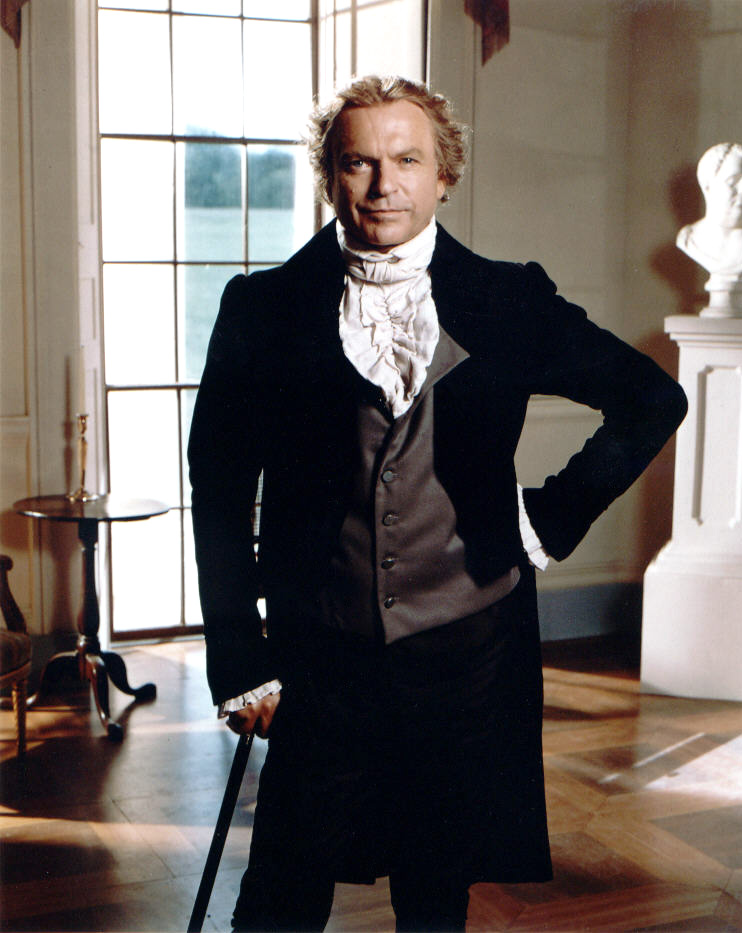 And this one can speak for itself, because it renders me speechless: Ahhh. I feel so much better now! Hope you do too! 🙂