Do you know what day they hand out the Nobel Prizes? Most Swedes will be able to tell you: 10 December, the Nobel Day – Nobeldagen. The Peace Prize is given out in Norway, but the rest (as far as I know) are given out in Stockholm. 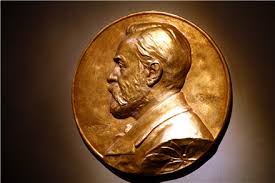 In the evening, the Nobel party (Nobelfesten) is televised, and people do enjoy watching the winners, the royal family, politicians and a bunch of others arrive at the City Hall in Stockholm. TV commentators will talk about who’s who, who’s wearing what, what the people who have just arrived and are now being shown to their seats are going to eat, and so on.

But it’s on telly and people do watch it, and it’s like “a thing”. Sometimes our Swedish ways are puzzling even to fellow Swedes …

Oh yes, the reason for the Nobel Prize. It’s because of Alfred Nobel (1833-1896), who invented dynamite. Why he instituted the Nobel Prize? Let’s let Martha Howe-Douglas and Jim Howick of Horrible Histories explain that one … 🙂