We were actually busy watching part two of Syfy’s Alice on DVD last night, so I have yet to see Women in Love. Here are some reviews I’ve tracked down, to see what “the professionals” have to say about it. Not that it should be used as a guide as to what you might think of it yourself, because professional critics are generally from a different planet than the rest of us.

Andrew Billen of The Times gave it 4 stars out of 5. He’s not too impressed by it, finding the original novel “hard to take seriously”. Not quite sure what he means by that specifically. I have issues with the book, which seems to be more part two than part one (being the prequel The Rainbow from what I’ve understood these reviews), but take it seriously? Well, yes. And finding it a bit weird, dull and preachy too. Billen seems to think that the story was best served when it was first published, in the 1920s, when sex in books was something revolutionary, but nowadays, “Lawrence’s sexual philosophy looks at best like a late corruption of the Romantic movement and at worst comical.” Ouch.

Billen further remarks that a lot of the story has been scaled back to the bare bones, but the dialogue has been kept fairly intact. I don’t personally see DH Lawrence as a great dialogue writer, because his characters tend to be a bit … well, philosophically preachy. It doesn’t always seem like the sort of things people would actually be saying. On the other hand, he gives the characters great personalities through the ways they speak sometimes – like the stark contrast of Connie’s “correct” English in Lady Chatterley’s Lover and Mellors’ Derbyshire brogue, for instance.

On the plus side, Billen can’t fault the direction of the cast:

Rachael Stirling makes Ursula both sexually precocious and an innocent when it comes to keeping men from hitting on and, indeed, simply hitting her. Rosamund Pike as her sister, Gudrun, had an outstanding scene in which by facial gesture she reacted to a public attack by her lover’s wife. If Joseph Mawle has yet to bury memories of Oliver Reed as Crich in the Ken Russell movie, Rory Kinnear superbly reinterprets Birkin, the Alan Bates role, turning him into a very confused young man.

And he ends with saying that it “so nearly works for me that it makes no odds.” What’ll he make of part two then, I wonder? 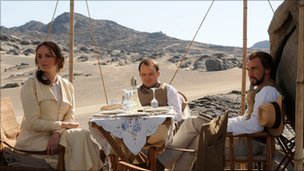 Sam Wollaston in The Guardian starts off by describing the opening scene vividly. He then points out that the scriptwriter, William Ivory, was born in Nottingham. Didn’t actually know that, but hey, kudos for keeping it local! (Aside from the whole filming in South Africa for cost reasons (!), that is.) The funny thing with this reviewer is that he has a surname that’s only an S too many to be an area of Nottingham. How apt.

Wollaston was hoping he wouldn’t have to be the one reviewing it, as he encountered DH Lawrence in school and never really liked him. He does admit that this adaptation is “well done” but that the themes that were so shocking in the 1920s, i.e.

All that passion, and smouldering lust, the exploration of the sexual dynamics between men and women, women and women, men and men, set against a backdrop of class struggle and social change.

now feels “a little bit pretentious”. Fair enough. Wollaston isn’t sure he can face the second episode, seeing as how it will have “plenty more hardness and readiness” and even more pretentious love-seeking. Citing quotes like, “Come to me hard and ready as a disciple of Jesus” … yeah, with double entendres like that, I can see why his colleague at The Times couldn’t take it seriously. 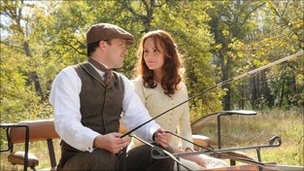 Ceri Radford in The Telegraph was considerably more impressed, using words like “intense, beautiful, heartfelt – and also toe-curlingly portentous” to describe both the first episode and DH Lawrence’s work in general. She hits the nail right on the head with this comment:

As this is Lawrence, the characters are not used to tell a story so much as to act as vessels with which to explore various terribly earnest ideas – something which poses a problem for the modern adaptor, not to mention viewer.

She forgot “reader”. The characters (in the novel) feel like they’re just there as an excuse for Lawrence to have a philosophical argument with himself, and could just as easily have put that argument into a book on its own, without all that malarky about a couple of sisters that don’t know what they want, and one of them dating a bloke who is a closet homosexual.

That the dialogue doesn’t translate very well into film is described by a few choice quotes that reek of the sort of pretentiousness (hey, maybe her colleague in The Guardian was on to something after all) that makes the novel a very difficult book to enjoy, simply because normal people don’t talk like this:

Furthermore, she enjoyed the performances of the four leads, and particularly praised Rory Kinnear as Rupert Birkin, finding his portrayal of the character “very touching”. The general feel of the review is positive, even though she does have some criticisms, which have already been pointed out. Her conclusion is that if you love the books, you’ll love this. If not, you’ll probably find yourself “cringing behind a cushion in places”. Will make sure to have a cushion at the ready. Thanks for the heads up!

Alice-Azania Jarvis in The Independent is also impressed with the four leads, particularly Rosamund Pike, and her comment that they hardly interact at all in the first part is interesting. As part one seems to be The Rainbow, I really can’t comment. Haven’t read it yet, have no idea what it’s about more than that it’s about the same characters as Women in Love. And I’m not even keen on them in that. She says that the two couples “exist as parallels, male and female equivalents, coming to terms with the social changes of the day.” How intriguing!

Jarvis reflects on there being lots of things happening in part one, and that the “quiet, almost whimsical, nature” of Ivory’s script lets “events to unfold gently, playing second fiddle to the internal dramas of the characters”, bringing up that the main theme of the two novels are “sex and guilt”, but that the adaptation still worked. It could very easily have gone the other way.

What I do have a slight issue with, is the offhand comment that sex is everywhere because “this is after all D H Lawrence”. Oi! He wrote plenty of things in which people didn’t have sex or even get their kit off in a suggestive way! Most of Women in Love is spent decidedly not having sex, as is Lady Chatterley’s Lover, for that matter. Jarvis also goes on to say that about half the programme is done in the nude. Sounds doubtful, but as I have yet to see it, I can only glance sceptically in her direction.

She does point out that the adaptation “resists the temptation to become period smut” and that it’s instead a “quietly engaging depiction of change through the generations”, so she is perhaps the most positive of these four reviewers. She looks forward to the second and concluding episode next week.

Had a look, but couldn’t find any reviews in any of these newspapers, and for most of them, I use that term lightly:

Will have a watch of the programme as soon as I’m able and write my own review.