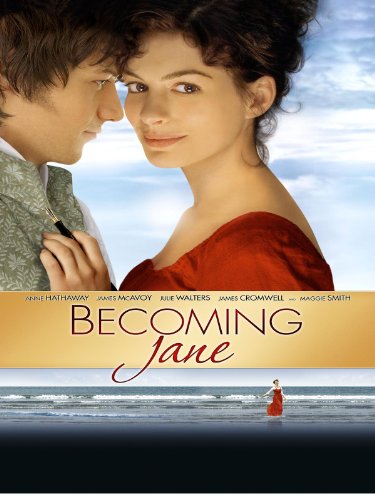 In a film with a delightfully ambiguous title, we meet the Austen family. There is the father, Reverend Austen (James Cromwell), the mother (Julie Walters), the son Henry (Joe Anderson) and daughters Cassandra (Anna Maxwell Martin, North & South) and … Jane (Anne Hathaway).

Bright young Jane Austen wants to be a writer, which is of course not the thing to do for young ladies in Georgian times. Her mother wants her to marry, and it doesn’t matter to whom, as long as he can provide for her. Jane, on the other hand, is longing for love.

She’s not without suitors – there’s the stiff but polite Mr. Wisley (Laurence Fox, Lewis), the obnoxious Mr. Warren (Leo Bill – I didn’t recognise the name but I definitely recognised the face), and … handsome Irishman Tom Lefroy (James McAvoy), who is the only one to actually win her heart. There’s no simple way to get to And Then They Lived Happily Ever After, though …

This is, in all fairness, a biopic of Jane Austen. It’s fascinating to see her family and her suitors and, if this film is anything to go by, you can really tell where she got the ideas for her novels from – Pride and Prejudice in particular. You can see where Mrs. Bennett came from, as well as Jane and Lizzie, Darcy, Willoughby and even Mr. Collins. Not to mention Lady Catherine, who is immaculately played by Maggie Smith. The name Gresham isn’t that far from Grantham, but I think her Downton Abbey character has a greater sense of humour.

Not sure about Jane herself. While I’ve nothing against Hathaway with the acting, I’m just not sure about the character. She comes across as a slightly obnoxious person. Then again, she didn’t have an easy time, especially not considering the times. What do you do when all you want to be is an author, but society dictates that’s not something A Lady should be doing? Glad times have moved on since then.

Austen’s life wasn’t exactly full of riches, and even though she was published, her fame wasn’t actually that great while she was alive – it’s after her death she has risen to the fame we know her for today. Strange but true.

The film goes from her (relative) youth and her relationship with Lefroy (“I’m Irish, can’t you tell from my accent?” < -- said in a very English accent) and then it jumps ahead to when she looks to be “really old” … which she really wasn’t – the poor woman died when she was just 41! So that feels quite strange, as you get the feeling time has moved on and now she’s in her 60s or something.

Most of the characters were likeable, the Austen parents and Cassandra in particular, and I felt sorry for the stiff Mr. Wisley. I hope he found someone to thaw him up in the end, because it did feel as if he’d be worth it. If only the woman in question wasn’t too intimidated by Lady Gresham, of course!

In a way, it feels strange to see Jane Austen’s life on screen like this. It feels as if they’ve turned what’s basically quite a sad story into a romantic drama to appeal to those who like her books. There’s the clever and witty young woman who has several suitors but she loses her heart to the one person who can’t have her, and so on, and of course there are the many hints at Pride and Prejudice. If it was truly a biopic, then surely, it would be less fluffy? It feels as if her life is trivialised, somehow. The tragic bits are there, but it’s still a little … well, fluffy. Made appetising for a modern audience – like the bit at the end where she seems to be oh so famous, which she wouldn’t have been at the time.

Overall, it’s a very good movie, though, and it’s a nice start to getting around to watch a bunch of the adaptations I so far haven’t seen and plan on trying to get through this year. 🙂 4 out of 5 letters.