It’s early 1940s, and puny Steve Rogers (Chris Evans, shrunk using CGI) has been declined to join Uncle Sam’s forces for the fourth or fifth time. His buddy Bucky (Sebastian Stan) is a soldier about to be shipped off to Europe, and he’s tall, dark and handsome. What is Steve? A nice guy who gets beaten up a lot, but who wants to fight for what’s right.

During one of his attempts to enlist, Steve is noticed by Dr. Erskine (Stanley Tucci), who approves his application for being in a program to create a super soldier. You don’t necessarily need to have great physical strength to be a hero. Colonel Phillips (Tommy Lee Jones) doesn’t agree, but lets the doctor get on with it. Aided by Peggy Carter (Hayley Atwell – it’s never explained what she as a Brit is doing in the US military) and Tony “Iron Man” Stark’s dad Howard (Dominic Cooper), little Steve soon becomes big, hunky Steve. And seconds after that, hell breaks loose.

The lab was infiltrated by a Nazi spy – Heinz Kruger (Richard Armitage, will get to him in a bit), though he’s never named in the film – who causes havoc trying to steal some of that supersoldier-creating serum with which Steve was injected. You see, Kruger works for an organisation called HYDRA, a Nazi specialist weapon section. At the helm of HYDRA is a scientist called Johann Scmidt (Hugo Weaving), with his sidekick Dr. Zola (Toby Jones). Schmidt doesn’t plan on being Hitler’s lap dog for long – he wants the whole world. Cue a doomsday device, let’s call it the CUBE-INATOR, and lots of heroics … if only the great symbol that is Captain America – i.e. Steve – could find a moment in his busy schedule of Inspiring Speeches to go save the world …

There you go, that’s basically what it’s about. Evil Nazis and Captain America being a symbol of hope fighting against that evil. And it has Iron Man’s dad in it, although ironically, I think JJ Feild (who plays the British officer dude that gets rescued, James Montgomery Falsworth, the one with the beret) looks more like Robert Downey Jr. than Dominic Cooper.

While we’re on the subject of rescues, I was happy to see Neal McDonough, or the Tin Man from the brilliant Syfy miniseries Tin Man. That man has a killer smile, even if he has the ugliest mustache known to man.

With a propensity sound incurably shallow, Stanley Tucci is seriously handsome. Why have I not seen him in anything before? He’s worth looking at! Also worth looking at is of course Chris Evans, who did a great turn as the Captain and seemed to enjoy himself. Have seen him before, in Sunshine and The Fantastic Four (him playing both the Human Torch AND Captain America will make a cross-over difficult), and he’s not just a pretty face and a hot body, he’s a decent actor too. Made Steve someone the audience can sympathise with. So we love a good underdog, but Steve is the sort of guy you want to hug. And take home and feed, like a lost puppy. 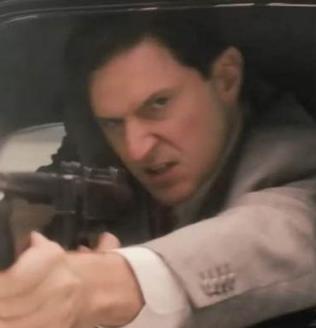 There are different reasons for watching this film. The Squeeze enjoys a good comic book adaptation, and I enjoy a good film … especially when it comes with Richard Armitage in mega-size. Anything else is immaterial. Heinz Kruger only has a few, short lines (except the first one, it’s long-ish and that American accent sounds terribly unnatural), and he’s not in the movie for very long, but you can tell he’s a shady bloke straight from the off. The way he’s introduced, the way the camera lingers on him, and so on. Couldn’t have said TRAITOR any clearer unless he wore it as a badge!

What I loved about his short stint, aside from a pretty good action sequence, was how eerily cold-blooded he acted. Shooting old ladies? Not a problem. Taking small children hostage and then throwing them into the water? Why, certainly. Bang! What an excellent villain! You’re bound to notice and remember him, simply from that performance. And to think he wasn’t even named, and his appearance was so short-lived. As was he, har har. His final words bugged me: “Heil Hitler”. Not the words as such, because he does play a Nazi, but how it was pronounced. I thought “WTF? ‘Hale’?! That’s not how you say it in German!” When I brought this up with the Squeeze, as pronouncing it “hale” as opposed to “hile” also about HYDRA, he said that no, it was okay to say “hale” and then he was confusing, saying it wasn’t German, even though HYDRA was German … Anyway. Been distracted too long. The film itself: Loved the 1940s setting, with its clothes and looks. Enjoyed the acting and the actors. Hailey Atwell is absolutely beautiful, and that 1940s look really suits her (if only I didn’t keep being distracted by how red her lipstick was). Catchy showtune about the star-spangled man. Lots of funny lines that had us all giggling merrily, like Tommy Lee Jones’s deadpan, “I’m not going to kiss you”. (Tommy Lee Jones was just utterly brilliant in general!) RICHARD ARMITAGE ON SCREEN! Good action sequences. Nazis – everyone knows they make brilliant movie baddies! (Remember the communists in Indiana Jones 4? No, neither do I. Yawn.)

There were several times where I was suddenly aware of watching a film. I mean, sure, of course you know you’re watching a film, but the point is – if it’s a good film, you get sucked in and forget you’re just watching it. Here, at times, I could feel a film crew just out of the shot and the shots just felt contrived and the scenery felt too much like being in a studio. It took away a lot of the enjoyment. No matter how brilliant an actor I think Hugo Weaving is, and he does an absolutely fantastic baddie. The Red Skull might have even less of a nose than Lord Voldemort, but oh, he’s a creepy megalomaniac alright. Makes you wonder if Elrond’s hiding something.

But even so, the hero of the piece is a little guy who has turned into a big guy. And he has been given a shield made out of indestructible kickassium or something like that. But essentially, his main power is throwing the shield like some sort of frisbee or boomerang and look good in tights. And that’s not really much of a super power …

At least we can hope that this is THE FIRST OF MANY films which will feature Richard Armitage. 🙂 Oh, and they’ve already started plotting a Captain America sequel.

After careful consideration, my verdict is 3.5 out of 5 indestructible shields.