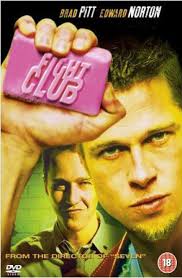 The un-named lead character, let’s call him the Narrator (Edward Norton) is an insomniac who starts attending support group meetings when his doctor won’t give him medication to help his condition. However, it’s not an insomnia support group he attends, but any other support group he can find, and he pretends to be one of them, whether it’s about testicular cancer or whatever.

As luck would have it, he discovers another support group impostor, Marla Singer (Helena Bonham Carter), and they decide to split the groups between them to avoid going to the same ones.

When his apartment building blows up when he’s away on a business trip, the Narrator phones up a guy he met on the business trip from which he just returned – Tyler Durden (Brad Pitt). They get into a fist fight, for the “fun” of it, and find it such a liberating experience they start a “Fight Club”, so that other men can pummel one another senseless just to feel more alive. And that’s just for starters …

Also starring Meat Loaf as Bob Paulson, a.k.a. the big guy with the big boobs.

Based on the novel by Chuck Palahniuk, Fight Club is in the top ten of the Best Movies of All Time According to IMDb users, a.k.a. it’s currently #10 on the IMDb Top 250 list. Not without reason, of course.

Fight Club is a strange film, no two ways about it, and things get really rather bizarre. I mean, c’mon, a guy’s home explodes so he decides to move in with some guy he just met on a plane? And they decide to have fisticuffs because that’s a great idea? And, without going into any details whatsoever, it spirals from there into definite “WTF?!” territory.

But it’s darn good, I tell ya, very well executed. It even has a Shyamalan-esque twist ending, which I don’t recall having seen coming, despite actually having being told about its presence previously. It’s really fascinating. Not me not remembering the twist, but the twist itself.

There are a lot of people in the film, of course, but there are only a handful of core characters – much like Se7en, actually. Not that the films share anything else … well, except for Brad Pitt and a certain level of grit. There’s a level of dark comedy to Fight Club as well, but considering it’s from the mind of Palahniuk, who also wrote the book on which Choke is based, that doesn’t surprise me.

If you don’t like to see people punching the crap out of one another, you might want to give Fight Club a miss … or at least fast-forward through the fighting scenes, because the film really is worth seeing despite the violence.