Might just make a habit of commenting on the news on Fridays. Kinda fun! …Even though it’s Saturday by the time I write this, as I was catching up on Lost earlier tonight. Speaking of Lost, is Jack growing boobs? Looks like he’s starting to compete against Locke in the man-boob arena… This season is a bit confusing still but it’s getting there, slowly. Regardless of anything else, how squeeable is Desmond (Henry Ian Cusick)?! I like the character, even though he over-uses “brother”. There’s something with that accent – shame it’s not his natural one.

First off is the fab Emma Thompson in the Daily Mail, talking about being a mum, having the same driver as Kate Moss – causing the paparazzi to be very disappointed when the actress appears instead of the supermodel! If I had been a paparazzi, it would be the other way around. What’s Kate Moss? Really? Famous for being a junkie and for being too skinny. Meh, I say. How can that compare with the Prime Minister’s sister? Elinor Dashwood? Beatrice? Professor Trelawney? (To name but a few.) She also criticises the “size zero” ideal in the film industry. Oh, why can’t we elect this woman as prime minister in the upcoming election? She’d be awesome!
Read more: ‘Put some weight on girls!’ Emma Thompson on Hollywood’s obsession with skinny starlets

Speaking of skinny, there are two interesting articles about weight loss on the same website. One talks about a woman who underwent hypnotherapy to believe she had been fitted with a gastric band, and how she dropped three dress sizes in five months. She weighed “nearly 12 stone”. I’d be quite happy to weigh “nearly 12 stone”… I lost about 10 kg / 20 lbs / 1.5 stone (pick whatever measure you’re comfortable with) last year. Now I seem to have put it all back on again. 🙁 Hypnotherapy is good, though; the power of the mind is incredible, and I’ve been thinking of it. Worth looking into, because dieting can be harmful to your health! Apparently, scientists have discovered that dieting causes increased levels of stress hormones in your body, which in turn leads to an increased risk of heart disease and cancer. Operations are too scary, so maybe a mental gastric band is the way forward? 😉
Read more: I lost 3st after being hypnotised into thinking I had gastric band and Dieting really CAN harm your health: Slimmers at higher risk of heart disease and cancer

Then there’s the whole Icelandic volcano issue… which is interesting. Read lots of Wikipedia articles about related things, finding articles about other volcanos, the difference between a caldera and a crater and that when the one that’s going off now, it normally sets off another one nearby, which would have more widespread impact on the planet than just a few grounded flights. If Katla blows, we might be in for another Year without summer (Tambora, 1815) or the jolly events of Laki in 1783. Don’t mess with Mother Nature, because she’ll always win.

On a more positive note, the first election debate has been shown on TV with 9.4 million viewers, and most people seem to agree that Nick Clegg of the Liberal Democrats won that one. Perhaps now people will go from “a vote for the Lib Dems is a wasted vote because they’re never going to come into power anyway” to actually being the second or even the biggest party in the UK. Interesting times!

The Glastonbury Festival lineup has been revealed. Not that I’m planning on going. Speaking of song and dance… Daniel Radcliffe is going to be in How to Succeed in Business Without Really Trying on Broadway next year. Sounds like a comedy. I think he’d be a decent comedy actor. He’s a funny guy and he can do comedy really well – Harry’s luck potion high in HP6 really cracks me up! Can he sing and dance? Haven’t got a clue. Well, at least he can act. Well… sort of. (The crying-in-the-snow scene in HP3 makes me cringe, it’s so awfully acted.)
Read more: Daniel Radcliffe to sing and dance in Broadway musical

Oh yes, and Steven Seagal has been sued for sexual assault. Buddhists say living is suffering… Speaking of suffering, Whitney Houston got mixed reviews for her first UK performance in… er, a while. Finishing off, the South Park guys (Trey Parker & Matt Stone) are going to write a Broadway musical. About Mormons. Mmm, I smell a suit coming their way. Not one of those Mormon suits. A lawsuit. They’ve teamed up with some of the people behind Avenue Q, so the results will be interesting for sure… 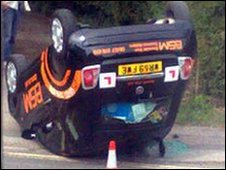 For the weird story of the week – if you’ve not had enough already – here’s one: one numpty of a learner driver managed to flip the car over on her second lesson. Jaysus. I got my license last year and if I was doing something that was potentially dangerous, my instructor would just slam on the breaks – they are double-controlled after all! So how the instructor let that happen is pretty incredible. Prejudiced I might be, but I don’t think women are worse drivers than men in general. There are bleedin’ eejits on the roads of both sexes. White van drivers, for instance. They’re rarely female. ‘Nuff said.

Have a nice weekend – over and out!