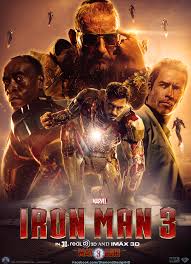 And so he’s back! Tony Stark (Robert Downey Jr) is having a few issues after the events in New York, and things are a bit tense between him and Pepper (Gwyneth Paltrow), as he can’t sleep and one of his automated suits takes issue with her in the middle of the night.

Things aren’t made better when a guy who calls himself the Mandarin (Ben Kingsley) hacks all the TV channels and threatens everyone in a sort of Bin Laden way – albeit more technically advanced.

Meanwhile, Aldrich Killian (Guy Pearce) wants Pepper and Stark Industries to invest in a sort of bio-feedback tool, James “Warmachine” Rhodes (Don Cheadle) has had a paint job done on his metal suit and is re-branded the “Iron Patriot”, and shit really kicks off when Happy Hogan (Jon Favreau) is injured in a strange bombing downtown, with love from the Mandarin.

Tony Stark decides it’s time to get personal – no one puts his former bodyguard in a coma!

Also starring Rebecca Hall as Maya Hansen, Paul Bettany as the voice of Jarvis, James Badge Dale as Eric Savin, Stephanie Szostak as Ellen Brandt, William Sadler as President Ellis and, although it’s not mentioned on IMDb OR Wikipedia at the moment, Miguel Ferrer as the Vice President.

There are nice nods back to The Avengers, and just in general, Tony Stark is on fine form. The Iron Man films have always been very entertaining, and the third instalment is no exception. There are many, many laughs, and many, many explosions and things. Despite being a nervous wreck from saving the world from an alien attack, he still manages to build a bunch of prototypes.

Although I’m not normally a fan of token child characters – because they tend to be hugely annoying and run out in front of cars, of stupid things of that variety – Harley (Ty Simpkins) isn’t bad. Okay, yes, he still does things without thinking, but because Tony Stark has such a way with him, it’s all forgiven. Talented kid too, as it happens.

What I really enjoyed was that Pepper also got to be all kinds of kick-ass, but I won’t go into details because that would be to spoil things. And I think you’re better off not knowing certain plot elements.

Ben Kingsley’s character was definitely an eye-opener. What a great character! 😀 You could see there was something off with the baddie straight away, so the reveal wasn’t so much of a surprise. No, I don’t mean the reveal in the mansion, I mean the real reveal. Or reveals.

According to the Squeeze, who knows his comics, they’ve combined a few different storylines into one film. There’s the Iron Patriot plot, the Mandarin plot which has merged with the AIM plot, and the many prototypes is a fourth one. Well, I just thought it made for an interesting film, and I have zero knowledge of comic canon Iron Man.

Is this a film worth seeing? Oh most definitely, especially if you liked the first two. They say sequels can’t surpass the original, but you know, I think Iron Man 3 does a pretty good job. It definitely stands its ground, and it does so really well. In fact, I could go on and on and on about how enjoyable this film was – and you don’t have to see it in 3D to have fun, 2D works just as well.

In the end, it seemed as if they closed the book on the series, and if this really is the last film in a trilogy, then it’s going out with a bang. However, it seems as if the plan is to make more. We can only hope! Meanwhile, keep seated until the end of the credits, because in true Marvel Studios style, there’s something good for those who wait. I won’t say what, or who, but it’s really rather funny.