When I first heard of North & South, my mind went to the American Civil War and Patrick Swayze, and I thought it was very odd that Guy of Gisborne would have been in something like that.

Well, after some research (= a short trip to IMDb), it wasn’t diffifcult to deduce that the Patrick Swayze North & South and the Guy of Gisborne North & South were two vastly different things. Hooray! Both are of course period dramas, but instead of a story of some American soldiers, we were in the familiar and friendlier (less guns, more … euh, riots *cough* okay, but friendlier from the point of being familiar) territory of the BBC going Victorian on us. Also, there’s the issue of Richard Armitage in a cravat, which excites me a heck of a lot more than that of aforementioned dance teacher from a certain 1987 surprise blockbuster.

I didn’t even have to get the DVD at that point, because as my interest for this production was on the rise, BBC4 started to re-run it. And it was delightful! I can’t remember when exactly this was, and if it was before or after s3 of Robin Hood had started, but I think I actually managed to watch it on TV without swooning too much. Doesn’t mean there was no swooning, because oh my goodness, how could you not?

The story is from a book by Charlotte Brontë’s friend Elizabeth Gaskell, who was born 200 years ago on this very day! 🙂 It follows the life of young Margaret Hale (Daniela Denby-Ashe, the daughter in My Family), whose father is the vicar of little Helstone, somewhere down South where the sun is always shining and everything’s lovely. Mr. Hale has a crisis of faith, resigns from his religious duties and takes wife, daughter and servant oop North, to the dark, dirty and dreary cotton mill town of Milton, where he is going to teach. In Milton, Margaret encounters both sides of the working spectrum: the mill workers (the Higgins family) and the mill owners (the Thornton family).

She befriends Bessie Higgins, while the stern yet conscientious – and dashingly handsome – master of Marlborough Mills, John Thornton (cue Richard Armitage in one of his many “John” roles), leaves her cold. He, on the other hand, overcomes his (not to mention his mother’s) initial reservations regarding her, and starts falling in love … but the road to win the heart of Miss Hale seems to be about as tricky as running a mill when the workers are threatening strike action. Which they are.

The thing that struck me the most as I was watching this, aside from nurturing a slight crush on Nicholas Higgins (Brendan Coyle) along with the one for Mr. Thornton, is how similar the story is to Jane Austen’s Pride & Prejudice. There’s a man and a woman, she takes an instant dislike to him, he doesn’t seem too keen on her either but secretly develops a huge crush, proposes, gets rejected in no uncertain terms, saves the day while she’s started to realise that he’s not that bad after all and that her feelings are now “quite the opposite”, and then he proposes again and they presumably live happily ever after. The only difference is that this is set half a century or so later, Thornton doesn’t own “half of Derbyshire” and actually has to work for a living (and isn’t a stiff toff), and Margaret doesn’t have a bunch of silly younger sisters. The female protagonists’ mothers are both a bit testing (Mrs. Hale isn’t hysterical, just depressing), and their fathers are both a bit bookish and quiet. North & South is not as famous or “big” as Pride & Prejudice, and is a lot darker and gritty. It can’t be grittier than P&P simpy because the fact that P&P has no grit. This is social commentary of the times, reporting from both sides of the conflict, and frankly, it’s a lot more interesting. I’ll go into that when I post about the book. This is about the four-part BBC miniseries – focus, woman!

The book was adapted by the fab Sandy Welch (Jane Eyre ’06, Emma ’09) and there are some differences between the book and the miniseries, but nothing that seems out of place. The Great Exhibition isn’t in the book, but I love the glaring contest between Thornton and Lennox. Of course, there’s also the famous Train Scene, which is where the adaptation ends. They had to go back and re-shoot it, apparently, but Daniela Denby-Ashe didn’t mind spending a whole afternoon snogging Richard Armitage. Gee, lady, you don’t say.

The matriarch Mrs. Thornton (Sinéad Cusack, sister of Sorcha) is a very strong and determined woman, fiercly protective of her son, to the point of being a bit scary – imagine her being your mum-in-law! It’s a fine line between having a doting mother and being a mummy’s boy, but I think Thornton balances that line with grace. His sister Fanny, however, is just plain obnoxious.

There is so much heart and so much careful attention to detail in this production that you can’t help but falling in love with it. They even played about with colour settings to show Helstone in a beautiful, full-coloured haze as a contrast to the grey and plain and colourless Milton. I didn’t actually notice that as the four episodes progress, Milton gains colour, as Margaret’s perceptions of the town and it’s people changes. Good thing we’ve got DVD commentary for that sort of thing! (Yes, not long after, I got the DVD. Had to. There’s an interview with Richard Armitage on it.) The commentary also said about a scene where the mill owners are having a meal and they shot each person individually for their lines, and how RA got so bored waiting for his turn that he arranged the stilton on his plate into a smiley face.

They filmed in a working cotton mill, which is the sort of thing Richard Armitage’s ancestors were working with back in the day (his parents, incidentally, are named John and Margaret – how’s that for a coincidence?), and the production crew say that when he put Thornton’s clothes on and walked around the mill, he wasn’t acting, he was Thornton. No wonder an army of fans emerged from the unsuspecting public – acting and brooding like that, in those cravats, with that voice … wowza. 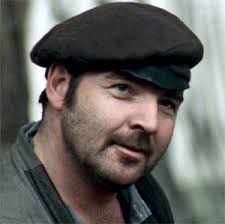 I’m not that taken with the character of Margaret, though. She just seems to be a bit too naive and she gets on my nerves a bit. I’m sort of torn between liking her and finding her a bit too annoying.

Nicholas Higgins, what a sweet (and handsome) man. He seems so kind and strong and comforting and lovely – not to mention the whole rebel thing he’s got going on. Stick it to the man!

I do love the Hales’ housekeeper, Dixon (Pauline Quirke). Very unusual servant, doesn’t quite know her place and the way she talks of Mrs. Hale is more reminiscent of that of a lover and a friend rather than a servant, which is interesting in itself.

Anyway, I’m rambling again, as usual. It’s a wonderful adaptation of a wonderful story and if you’ve not seen it, you’ve missed some terrific performances and a love story that will melt your heart. And educate you on the subject of Victorian England’s cotton mill politics.