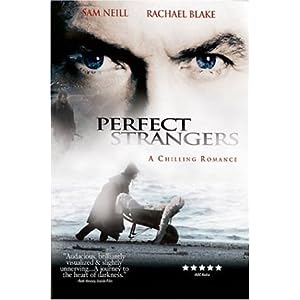 I’ve heard from a non-fan who said this was a good movie. See, ask any Sam fan and they go all dreamy at the mere thought of this thriller/black comedy/romance story, written and directed by Gaylene Preston. Story is: woman (Rachael Blake) goes out and goes home with the best-looking guy in the bar (Sam). They go to his boat. When she wakes up in the morning, they’re in the middle of the ocean, and he takes her to his place – on a deserted island. She is not amused at having been kidnapped.

Now, any Sam fan will have a problem with her character, because if they were abducted by Sam and taken to a deserted island to be his forever… well, what’s the problem? It’s a dream come true! And yet, she’s not happy. So fans have a bit of a hard time seeing things from her perspective. So it’s difficult to be neutral, as I’m a fan (obviously) of the guy, and think the movie is great (the shooting practice scene is very funny). Other opinions vary. Worth a chance, I say! *goes back to ogle the poster she talked the small cinema in Gothenburg into getting* (We were two people watching that film. I wonder if the other woman was a fan too.) 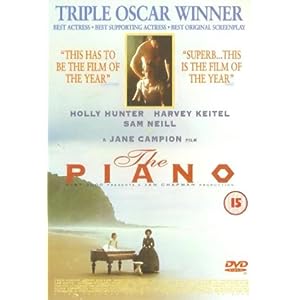 AFI nomination Best Actor in a Supporting Role. Should’ve been Oscar nominated, but that went to the ladies again. Mute woman (Holly Hunter) with annoying child (Anna Paquin) are shipped off to New Zealand to marry… you guessed it – Sam. They don’t get along very well, and she cares more about her precious piano than anything else. The neighbour (Harvey Keitel) gets the piano and starts taking lessons… in how to get Hunter undressed. Sensual, sure. Good, absolutely. This was actually my first Sam encounter. I saw the music video to the theme song (oh yeah, Michael Nyman’s score is fantabulous!) when I was 11 and thought that oh, that bloke looked well decent. Written and directed by Jane Campion, this movie was pretty much showered in awards, and deservedly so. 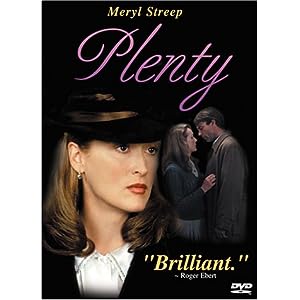 This is the second (well, first) movie with Sam and Meryl Streep. Meryl Streep is a woman in France, helping out the Résistance in WW2. One of the secret agents that parachutes in is Sam, they spend the night together, and then he has to go. The movie is about Streep’s annoying character’s life, and she lives in her own little world, wants to be back in the Résistance and is basically haunted by the memory of Sam and is slightly mental. Sir Ian McKellen’s in this film too, btw. It’s a bit long and confusing at times, and Streep’s character will annoy the crap out of you, but it’s not a bad movie. It’s just a bit dull. 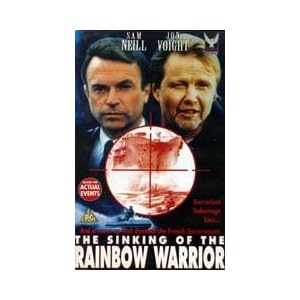 French secret service planted bombs aboard a Greenpeace ship in a New Zealand harbour, one man died. Big political scandal when that came out, some time doing the 1980s? (Yes, real life story.) Angelina Jolie’s dad Jon Voigt as the activist captain. This is a movie that could’ve been so interesting, but even though it also features a pre-Xena Lucy Lawless it fails to be interesting. Acting is bad, script is dull… 🙁 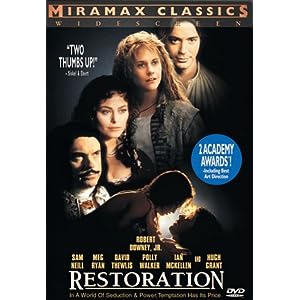 When I saw the trailer of this, I thought it would be a comedy. After all, a young doctor (Robert Downey Jr.), known mainly for debauchery, is invited to King Charles II (Sam with a moustache and big wig). He’s to marry the king’s lover, to quench a few rumours here and there, and the only rule is – of course – don’t fall in love with her. Guess what? 🙄 However, it’s not a comedy, it’s drama! The king doesn’t like his rules being broken, so all the riches that was given to the doctor is taken away. He later finds an Irish woman (Meg Ryan, not the most convincing accent, but I do believe it to be better than that of Julia Roberts in Michael Collins) in an insane asylum, where he gets a job thanks to his old doctor pal (David Thewlis). Also features Hugh Grant and Sir Ian McKellen. Surprisingly good – even though it wasn’t a comedy, I wasn’t disappointed with the film. 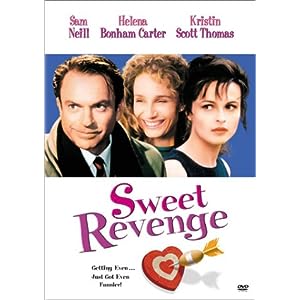 Helena Bonham Carter and Sam meet on Tower bridge, where they’re both planning on taking their lives. Well, she tried, but has got stuck, and Sam helps her up. They decide that instead of killing themselves, they will get back at those who have done them wrong (Kristen Scott Thomas and Steve Coogan). Bonham Carter is getting back at Sam’s boss, while he gets back at Scott Thomas… who is the wife of Martin Clunes, who Bonham Carter has had an affair with. Except he falls in love with her, and Bonham Carter turns out to be a pyromaniac psychopath. It’s great fun! And I haven’t even mentioned the horrible clothes and Sam being tied up in bed in only fluffy underwear!