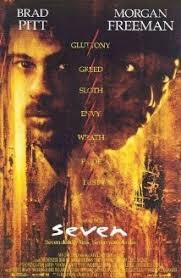 Even before the film has properly started, you get the feeling that this is going to be a gritty drama. And it is, and it has sailed all the way to #22 on the IMDb Top 250 list.

Detective Lieutenant William Somerset (Morgan Freeman) has been around the block, and is about to hand in his badge and retire. He’s paired with Detective David Mills (Brad Pitt), who’s a newcomer in town, in order to investigate a gruesome murder.

Unfortunately for Somerset, it’s not exactly an open and shut case – but turns out to be a string of murders, one more horrifying than the other. A serial killer is on the prowl, determined to make a statement.

Seven, or Se7en, is not for the faint-hearted. For starters, the crime scenes are really freakin’ disturbing. Trying to get inside the killer’s insane mind is something that you shouldn’t really be exposed to if you’re easily upset, because it’s a very dark place.

As he came down when I had watched most of it, the Squeeze offered some plot pointers that I hadn’t actually thought about before but are actually rather obvious when you think about it. (Without giving too much away, it concerns how the final two murders fit in with the rest.)

I don’t remember if there wasn’t a lot of background music or if there was none, but if  there was any, it blended in so well with the events on screen that I didn’t actually notice it was there.

The quiet, reflective style of dialogue and film-making that goes on here, paired with the rough, “dirty” feel and marvellous acting by the lead characters make for one heck of a film. It’s not a “nice” film, or one that will make anyone but a psychopath feel creeped out and icky, but it’s one of those films you just have got to see. Provided you can stomach it. For me, just barely.