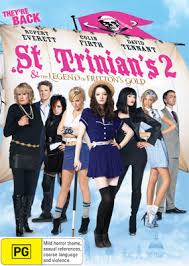 In this second instalment (a third is apparently on the way) of the anarchic schoolgirls of St Trinian’s, there be pirates! Pirate Fritton, in 1589, robbed an ancestor of Sir Piers Pomfrey (David Tennant), who would very much like the treasure back – starting with a ring.

The girls (Talulah Riley, Juno Temple, Tamsin Egerton, Gemma Arterton, Jodie Whittaker, Sarah Harding, et al.) are having none of it, and stick up for their beloved headmaster Camilla (Rupert Everett), and try to steal the ring back.

Also starring Colin Firth as Geoffrey Thwaites, Toby Jones as the Bursar, Celia Imrie as Matron and Katherine Parkinson as the Physics Teacher.

What can I say? I mean, David Tennant and Colin Firth in the same film. That’s a good argument for watching if ever I saw one! Or, if you prefer, Rupert Everett in drag. But still, no, my vote is for the eyecandy.

As fun as the stories about St Trinian’s are, and despite the fact that this particular instalment has PIRATES, it’s not quite as much fun as the first one. Perhaps it’s to be expected of a sequel, but it doesn’t mean I can’t still be disappointed. Although, it’s not much of a disappointment, because I still thought it was a hoot, but maybe I’m just easily amused.

In any case, if you’re expecting high-brow entertainment, The Legend of Fritton’s Gold is going to leave you cold. It’s jolly good, if ridiculous, fun, and that’s all there is to it. Whimsical and silly, yet adventurous and, eh, riotous. It’s entertaining, at the very least, and that’s all I asked of it.

Okat, it’s been too long since I saw this film to remember all the details properly, but you know … Did I mention David Tennant is in it? AND Colin Firth? David Tennant in zany comedy mode, which is all kinds of awesome? I mean, you could giggle like a schoolgirl for less!