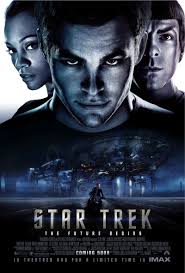 The film opens with a blast from the past: a Federation ship is under attack from a Romulan ship, captained by Nero (Eric Bana). Captain George Kirk (Chris Hemsworth!!!) evacuates the damaged ship and sends his heavily pregnant wife Winona (Jennifer Morrison from Once Upon a Time) away to give birth while he goes down with his ship.

A number of years later, the grown-up James Tiberius Kirk (Chris Pine) gets into a bar brawl and is persuaded by Star Fleet officer Pike (Bruce Greenwood) to enlist. Well, not like he has anything better to do … and besides, it will allow him to keep hitting on Uhura (Zoë Saldana).

And then they all end up on the Starship Enterprise fighting that very same Romulan guy from a couple of decades ago (give or take), who has a big chip on his shoulder when it comes to Mr Spock …

If you’re a Trekkie, you might have a few things to say about this franchise reboot, but seeing as how I’m not, and in fact have learned about the Star Trek characters through a number of parodies and whatnot (although I did semi-follow the spin-off series with the female captain – Star Trek: Voyager, was it?), I base my opinions on this Star Trek film on being a fan of the sci-fi genre in general. Not that it really matters, because it’s still made it to the IMDb Top 250 list (#222), so it’s obviously very well liked by a whole number of people.

We saw Star Trek when it came out in the cinema back in 2009, which was before I started this blog. Before the film came out, we saw the teaser trailer, the one where they showed the Enterprise being built, and it looked awesome. When the film actually came out, it turned out to be pretty darn awesome as well.

Like I said, I have no real comparison to the original crew (Nimoy, Shatner, Takei, et al.), but this is a good way of getting to know them. And to get interested in the Star Trek universe, to be fair. You could say the same for Doctor Who, actually – an old, long-running, cult sci-fi TV show where the special effects haven’t necessarily aged well, but that got a Noughties re-vamp and suddenly it’s so incredibly watchable that you’re even considering watching some of the old stuff and think maybe it’s not that bad after all. (Admittedly, the only thing I really know about old Star Trek was that a young William Shatner had it goin’ on.)

What I really mean to say is THIS IS A GREATLY ENTERTAINING FILM. Sci-fi, space battles, future tech, comedy, adventure, eye candy, pointy ears, sarcasm, WARP drive, fast cars, and even a bit of romance, and what have you. It’s fabulous. And you really ought to see this one if you’re planning on seeing the sequel (check back here on Friday!), so no excuses. See it.