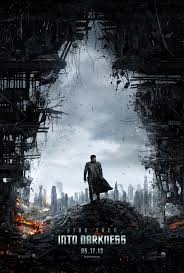 At the end of the previous film, James T Kirk (Chris Pine) got to be captain of the Starship Enterprise. At the start of this film, he is his reckless “I do things my way, regardless of that rule book of yours” self just a bit too much, jeopardising the life of Spock (Zachary Quinto), and is demoted and put under the command of Admiral Pike (Bruce Greenwood).

Meanwhile in London, a Starfleet employee (Noel Clarke, Doctor Who) blows up a building. Starfleet command meet up to discuss the perpetrator, John Harrison (Benedict Cumberbatch), and how to catch him – when Harrison shows up and blows them to smithereens.

Admiral Marcus (Peter Weller) reinstates Kirk as captain, and tells him to go find Harrison – despite him hiding in enemy territory – and blow him to bits. But things rarely work out entirely the way you’d want them to …

It’s not so easy being a captain of a starship, but the Star Trek franchise reboot is definitely going places. This one is currently even higher up the rankings than the 2009 film, coming in at a nice #172 of IMDb’s Top 250 list. (The previous one is in the 220s.) And I said the previous one was entertaining? So is this.

And I’m also beginning to understand why people go ga-ga over Benedict Cumberbatch. I already knew him to be a terrific actor, so that’s not really news, but he has a very commanding presence – or maybe it’s just the role he’s in, I don’t know. In any case, he’s electric to watch, and yeah, I’m definitely beginning to understand the appeal there. Wowza.

The Enterprise crew is back, and it’s nice to see them again, almost as if they’re some good friends you haven’t seen in a while. The newcomer, Alice Eve, seems mainly to be there as eyecandy and nothing else, which is a shame – considering the only other female character is Uhura, we could do with a bit of estrogene around the place. Fortunately, she does get to be useful a bit later on in the film.

There are fight scenes, there are explosions, there are impressive feats of engineering (Scotty ♥) and there is a lot of butt-kicking to be had. Never a dull moment. Some moments are perhaps more predictable than others, but all in all, Star Trek Into Darkness is a great continuation of the story, and I don’t know about you, but I can’t wait for the next one.