Yesterday, it was the name day of everyone called Anders. There’s a saying in Sweden, “Om Anders braskar så slaskar jul”, roughly “If Anders is cold, Christmas will be wet”, but in archaic language. It works the other way around too. If Anders[‘ name day] is cold or freezing, Christmas will be mild and rainy, but if it’s mild and rainy on 30 November, Christmas will be cold and frosty – maybe even snowy if you’re lucky. (Doesn’t really work as well if you live in the northern part of the country, where you’re probably pretty much guaranteed a snowy landscape from November onwards. Or maybe that’s just a prejudice from us southerners.)

If I remember it correctly, it’s nothing but a myth, but we still like to say it. Here, the day was fairly cold, starting with having to scrape frost off cars in the morning. Still not very cold, though, it was around -1°C when I left the house in the morning.

If Facebook is anything to go by, it would seem like most of Sweden has recently had a snow covering, so they better enjoy it while it lasts. At least if we are to believe the old Anders saying!

What was the weather like for you yesterday, and would the saying indicate you’re in for a winter wonderland or a rainy mess?

Incidentally, 30 November has also become a time where right-wing extremists tend to celebrate King Karl XII as a hero, despite him losing a bunch of wars and thereby ending Sweden’s control of much of northern Europe. But then neo-Nazis were never known for their reasoning …

A much nicer way of welcoming December is the annual Christmas calendar on TV: Julkalendern. It’s a 24-part TV series, with episodes only about 10-15 minutes long, and it’s shown from 1 December every year. Not the same one, they make a new one every year (with a couple of exceptions). A new episode is out every morning, repeated in the evening, and a lot of people watch it. If you’re a child, it’s a given.

They normally also have a radio calendar, so they also tell a story in 24 parts on the radio every day (unrelated to the TV show), and for both the radio and the TV calendar, you can get an advent calendar and open it after you’ve seen or heard the latest episode. 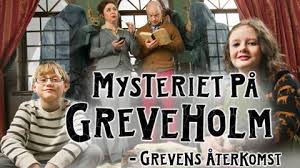 This year, on TV it’s apparently the return of the 1996 calendar, Mysteriet på Greveholm … but with a new family moving in to an old castle in the south of Sweden. A series two, if you like. The first series, I seem to recall, had ghosts, a robot and visitors from outer space. I remember liking it, so I’ll see if I can remember to tune in – you can follow it over the internet, even if you’re not in Sweden!

Unless they’ve changed it, the SVT (Swedish Television, think a Swedish BBC) production houses of the three largest cities in the country vary who gets to make the Christmas calendar. I guess this year was Malmö’s turn.

Last year, the show seemed to be somewhat Dickensian, but I don’t remember seeing any of it. The last one I tuned in to and followed was 2008’s En riktig jul (A Real Christmas), about a 10-year-old girl living with her mother, who wanted a REAL Christmas, one she wouldn’t have to share with the next-door neighbour and his son. Santa sent out an elf to help the girl achieve her Christmas wish, but the elf in question wasn’t particularly competent. It was a very cute show, with plenty of Christmas feel.

Now all I need to do around the house is to clean up a little so that I can get the Christmas decorations out. Then it’s time to start the preparations! 🙂