Back in the 1600s, Sweden was a much bigger country than it is now, and we were at war a lot. We even went all the way down Germany and besieged places like Koblenz (colour me surprised!). As school children, we learn of all this, and we can’t not remember the story of how King Gustav II Adolf (wider known in English as Gustavus Adolphus Magnus, apparently) met his maker. 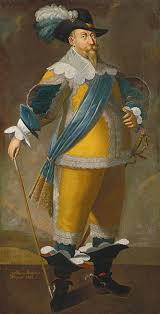 It goes something like this (bearing in mind it was 20 years ago now):

The 6th of November 1632 was a very foggy day on the battlefield in Lützen (outside Leipzig) in Germany. The king, riding in front to lead the troops set off as normal … but because of the fog, and because he had a very fast horse, he didn’t realise that he had managed to get far ahead of the rest of the troops, until he was basically right in the middle of the enemy lines. By then it was too late, and the king came to a sticky end.

But we still won the battle.

Technically, it was fog mixed with gunpowder smoke, but he was separated from his troups, and he did die as a direct result of this, and the political implications and why we were at war weren’t exactly made clear to a bunch of 10- or 11-year-olds, but you know. And apparently, according to the calendar we use nowadays, the battle was actually fought on the 16th, but we used a different calendar back in the day and so to Swedes, it was the 6th. Never knew that. Thanks, Wikipedia!

The date, 6th of November, is still celebrated today, and it’s an official flag day too, which means if you have a flag, hoist it. This is something we do regularly over the year, and should’ve been mentioned a lot earlier, but then I did miss to do a number of posts in August through October, so I guess I’ll have something to do next year. Apparently, Finland and Estonia also have celebrations on this day for the same reason, although the Finns have it as a “Swedishness Day”, apparently. (Terve, Suomi!)

There’s a kind of pastry sold on this day, bearing a picture of the king. I don’t think I have ever tasted one, and I’m struggling to remember if I have seen them sold anywhere, although I don’t suppose I have ever gone to the local bakery specifically on this day just to see if they do. Looking at Google Images, there doesn’t seem to be any particular set recipe or style either, as all the pastries look different. The only thing in common is the king’s head on top. This might explain why none of my Swedish cook books have a recipe for them, including the much loved and celebrated Sju sorters kakor.

Since 1997, though, it has a more personal association. Something I’ve mentioned before, actually, although not linked to the date. It was the evening when my mum (and her brother) got the “it won’t be long now” call from the hospice, and she stayed away all night. The only ones at home at the time was my oldest sister and I (middle sister was away at uni and dad was away on business), and we spent the rest of the night talking, preparing ourselves for the inevitable. Mum returned home at 7am to tell us that her mother had passed away during the night, in the presence of her two children. She had been ill for months, so it was no surprise when she finally went. I’m glad she wasn’t alone. So while Allhelgonadagen fell on the weekend just gone, I’ll light a candle for her and for my other dearly departed.

And possibly bake a cake or something. Maybe I can make the king’s head out of sprinkles? 🙂