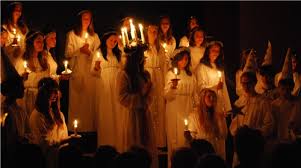 I recently realised that there are certain times of year when I miss Sweden more than others, namely December. “But we have things leading up to Christmas here too!” said the Squeeze, not at all understanding there’s a big difference. Yes, I can certainly light candles for Advent here too, that’s not an issue. I can also make the same kind of home-made candy, and most of the Christmas food I like I can make in Britain too. But it’s still not the same. Not just because it’s warmer here and less chance of snow. Things like waiting for someone to burn down the big straw goat in Gävle (newspapers today report someone did this last night!), Twelfth Night, and … Lucia.

Lucia is something we all grow up with and is a tradition that you won’t find outside Sweden, unless you go to the embassy or something. I can’t just dress up and have my own one-person Lucia procession, because it just doesn’t work. You have to be there, in Sweden, and I’m not.

So why am I getting quite emotional at this stage, and what the hell is Lucia anyway?

Well, it’s a bit strange, to be honest. The Lucia song (see bottom of post), which we have sung since the early 1900s, is based on a traditional Italian song. Indeed, Lucia has got its name from St Lucia (St Lucy), an Italian martyr saint. Makes perfect sense, what with Sweden paying attention to so many other Catholic saints, right? Not quite. It would appear the tradition of Lucia in Sweden has very little to do with her, aside from the name, meaning “light”, which is what it’s all about …

To get a better understanding of Swedish Christmas customs in general, you need to realise that Christmas in Sweden has a lot more to do with Viking customs than it does Christianity. I mean, for goodness sake, we don’t call the holidays “Kristusmäss” like it is in English, we call it Jul (Yule). In other words, to understand where Lucia comes from, you have to look beyond the silly attempt by the Church to Christianise a traditional (and indeed pagan) custom by naming it after a Sicilian saint.

By Lucia, you were supposed to have finished most of the preparations for Christmas (fat chance nowadays!), including the slaughter of a pig, which would then make up many dishes for the Christmas feast. If you consider 13 December being around what is now 21-22 December, this makes a lot of sense. Of course you want to be done with everything a couple of days before Christmas! Now, eleven nights before, it sounds strange, because if you’re done already, what else are you going to do in the mean time?

The youngsters were supposed to go door to door with lights and sing, asking for tidbits or money. This eventually evolved into the Lucia processions of today, which is a tradition from the early 1900s. Nowadays, you might still find kids in the neighbourhood dressing up and going door to door, singing Christmas carols for their neighbours, hoping perhaps for some gingerbread, candy, or money. It’s like caroling and trick-or-treating rolled into one.

The origins of Lucia is a long story, and if you want the full shebang, look up St Lucy’s Day on Wikipedia. A short version is that it’s a festival of lights full of pagan connotations, dating back to the middle ages. Lucia is even meant to symbolise a Germanic goddess or something like that.

Lucia processions, Luciatåg generally consist of one girl with a crown of lights on her head. If she’s an adult, the crown is usually lit candles (the melted wax gets into your hair and is a right bastard to get out, or so I’m told) – if she’s a child, most likely a crown of electric candles. Lucia is dressed in white and has a red ribbon around her waist, to symbolise blood. She’s accompanied by a number of other white-clad girls, who back in my day would have itchy silver tinsel on their heads and around their waists, carrying a candle in their hands – these girls are known as Luciatärnor, Lucia maids. (I base this translation on the fact that bridesmaids are called “brudtärnor” in Swedish.)

Following them, the boys, also dressed in white, with white cones with gold stars on their heads. These are called stjärngossar (star boys), holding a stick topped with a gold star. Most Luciatåg will also feature some red-clad lantern-carrying tomtenissar (gnomes), and brown-clad pepparkaksgubbar (gingerbread men) in hats. These roles are normally considered unisex.

In recent years, because Sweden’s big on equality between the sexes, there have been headlines about boys wanting to be Lucia and girls wanting to be a stjärngosse and neither succeeding. There used to be a hubbub about Lucia being anything other than a blonde, but this seems to have settled down a bit.

Every school will arrange a Luciatåg, and in most towns, there’s normally a vote as to who gets to be crowned this year’s Lucia. In Stockholm, the city’s Luciatåg usually go wake up the Nobel Prize winners in their hotel rooms – something which has frightened the living daylights out of a few over the years … Early in the morning, a procession of white-clad candle-carriers come singing. No wonder some people thought they must have died during the night! If you’re a Swedish parent, though, it won’t be too surprising to have your children dressed up and singing, waking you up by bringing you coffee in bed.

The Luciatåg will enter the hall or wherever the event is taking place, singing the Lucia song, which is about how dark everything is but that light is finally coming, brought by St Lucia (whose name has its origins in the Latin word for “light”, which is probably why her name was chosen). Once everyone has found their place, a number of traditional Christmas songs will be sung, which might or might not include a hymn or two. The song about Staffan (St Stephen) who feeds his five horses is normally reserved for stjärngossarna, while the gingerbread people sing a song about gingerbread men from gingerbread land. The gnomes also have their own song, about how they go to work while the rest of the household is asleep. Once all the songs are sung, Lucia will lead the procession back out again, while singing an encore of the Lucia song.

Afterwards, there would be lussebullar or lussekatter (Lucia buns, made with saffron) and gingerbread snaps to eat, maybe with a glass of julmust. Julmust is a traditional Christmas soft drink you can’t get in the UK anymore because IKEA decided they were only going to sell their own stuff, but because the recipe is secret, they can’t produce their own. As a result, they’ve stopped importing it. IKEA’s Swedish food court is dead to me. (Ocado, on the other hand, have started selling Swedish foods, and their selection is wider than IKEA’s ever was. If there was a “Like” button for this, I’d click it. I signed up and put an order through as soon as I discovered it, and definitely will be returning for more!)

This year, a school got into trouble for refusing kids to be gingerbread people because of racism concerns. Because apparently, dressing up like a gingerbread man singing about being brown (because gingerbread come in any other colour?) coming from gingerbread land “might offend”. They’ve since had to go back on that decision, as they were berated by newspapers and their readers, as well as people over social media, who think it’s political correctness gone too far. I quite agree. It’s technically more racist when you want to ban something that might offend a certain group of people than if they had just had an all-inclusive policy to begin with … but there you go. There has also been a story of how a 9-year-old girl was denied being a stjärngosse … although dressed up with a cone on her head and in the same white dresses as everyone else, you probably couldn’t tell if it’s a boy or girl, realistically.

In the video below you’ll find Sweden’s Lucia 2010 in Kungsholm Church in Stockholm, along with Södra Latin Kammarkör, exiting the church by singing the Lucia song – paradoxically using different lyrics than the ones below, which is the one I’m most familiar with, but there are three different versions of the lyrics going around.

Oh yeah, by the way, everyone wants to be Lucia:

I remember being very proud of my Lucia crown, because my mum was the only parent who had decorated the bog-standard green plastic crown with something other than tinsel (you can see a part of one of those on the photo there). Instead, she had taken the time to put twigs of lingonberry around it, with their dark, glossy leaves, and secured them with a red ribbon. It was beautiful. I remember her doing that few times, and every time, I thought my crown was easily the prettiest one of all.

P.S. All photos (except the one of me and Kajsa at Kyrkans Barntimmar) are from Google Image Search’s cache. Kudos to the photographers, whoever you are. 🙂