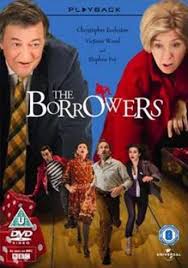 If yesterday’s review of the 1997 version of The Borrowers could be summed up with “we are not amused”, how would the latest attempt fare? Again, based on the books by Mary Norton, but this time, it’s perfectly clear where we stand in time and location: we’re in London, in December 2011.

After the death of his mother, James Millman (Charlie Hiscock) with his dad Robert (Shaun Dooley), move in to live with his potty grandmother (Victoria Wood), who keeps believing there are “little people” living there, and she’s determined to find them. Sadly, they’re also on the brink of losing the house, as they’re struggling financially, and Robert can’t seem to find a job.

Underneath their floorboards, it’s a different life altogether. There lives the Clock family – a family of tiny people called Borrowers, so called because they “borrow” things from us humans. Father Pod (Christopher Eccleston, looking very dad-like in that beard) is the one who ventures out into the house looking for scraps food and unused items the humans will never miss, while anxious mother Homily (Sharon Horgan) stays at home, where teenager Arrietty (Nottinghamster – yay! – Aisling Loftus) is getting more and more agitated over not getting to explore with her dad.

So, one night, she decides to go exploring, and is discovered by James, but they quickly become friends. However, when he returns her to the hole in the floorboards, his granny catches a glimpse, and starts ripping up floorboards … and calls in a creepy professor (Stephen Fry) and his assistant Jenny (Anne Hirsch). Professor Mildeye has had a theory about “minature humans” for years without anyone taking any real interest, and here’s the opportunity to catch one of them! How marvellous!

For the Clocks, it’s less fun – they’re forced to flee. In doing so, they discover they aren’t the only Borrowers in town … and that the first one they come across is the rakish Spiller (Robert Sheehan, Misfits) – another teenager …

To be fair, I don’t think this is very much like the Borrowers in the books either, but at least these characters act a whole lot more like I remember them, and these sure aren’t curly redheads with quirky hairdos and big teeth. They’re just miniature humans, like they should be. That alone is a big plus in my book.

The story is also updated to a modern setting, and I think it works really well. That they’ve added (remote control) car chases and flying (in model aircraft) … well, I’m not sold on the idea, but it’s fun. It’s got plenty of adventure and perhaps isn’t quite for the youngest, because what’s there for them? James is maybe 10-12, Arrietty is 16, and because Arrietty is a teenager, they deal with teenager issues – including sexual tension (not with James though, for goodness sake!)

There’s a very Christmassy feel to this version of The Borrowers. You get to follow passage of time through an advent calendar, and it all ends with Christmas celebrations. Aside from that, it does have a darker tone than you’d perhaps expect. James has lost his mum, his father is unemployed and struggling to get hired, they’re about to foreclose on the mortgage … and the professor will go to any lengths to prove his theory of tiny humans, as well as what he plans to do when he catches one. No, definitely not something for the five-year-olds.

It’s not bad, though, and I now really want to read the books again.