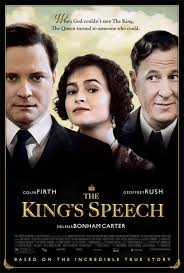 George V (Michael Gambon) is the British king, and he’s none too impressed by his son George’s (Colin Firth) stuttering. He’s of the school that says “just pucker up and talk properly, man!” rather than being an understanding and kind father. Hello daddy issues.

Oh well, at least the younger George isn’t next in line to the throne, unlike his brother (Guy Pearce). Instead, he can look after his two daughters (Freya Wilson and Ramona Marquez) and spend quality time with his wife Elizabeth (Helena Bonham Carter).

It’s just that Elizabeth decides to do something about her husband’s stammering and books an appointment with vocal coach Lionel Logue (Geoffrey Rush). Logue isn’t at all intimidated by treating the prince – in fact, the only one intimidated is the prince himself. But is he too intimidated by this stranger’s unorthodox (and surprisingly modern!) methods to actually get down to working on being treated?

Awards rained upon this film. It scored (amongst others) Best Picture, Best Director and Best Actor at the Oscars, to name but a few, and was it worth it? Oh gosh yes. Colin Firth, we already knew you were amazing, but wow. Those awards were so well deserved.

Without going on about it too much, The King’s Speech really lived up to my expectations. It’s charming, funny, and definitely warm. To think Helena Bonham Carter’s character is none other than the late Queen Mother! It puts history nicely in perspective, somehow, and makes George VI not just another royal on a coin, stamp or whatever, but one that really comes alive and feels like a real person. Sure, he’s born a prince and his father’s the king, but we also see the bullied brother, the loving father and devoted husband.

This is the sort of film I’d definitely watch again. It’s glorious, heartwarming and everyone’s brilliant. See it, if you haven’t already. Not for Colin Firth in a uniform (although that is certainly an added bonus), but for a film that will stay with you for quite some time.

5 out of 5 grammophone recordings.