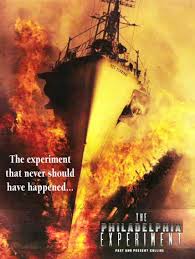 In 1943, the USS Eldridge disappears, and the crew along with it. It was part of the so called “Philadelphia Experiment”, a cloaking project, and it’s down in books about the paranormal because it’s said that off the coast of a completely different state, for the best part of a minute, the ship appeared. Cloaking? Teleportation! In reality, the ship didn’t just vanish and then never reappeared. (It could even be argued it never disappeared in the first place, but never mind.)

In this made-for-TV film, the Eldridge disappeared, and the people responsible for the project (Malcolm McDowell) stopped it. However, in recent years, other people want to resurrect the project, and create a device that … suddenly manages to make the Eldridge reappear. There’s only one crew member alive (Nicholas Lea), and he goes off to find out he’s now in 2012, and has a granddaughter (Emilie Ullerup).

Meanwhile, The Man wants Katheryn Moore (Gina Holden) to “take care of” the problem before news of it becomes too widespread, and she’s not against using nukes. Scientist Falkner (Ryan Robbins) wants a less explosive outcome. And so the time traveler and his granddaughter are chased around by a homicidal woman and her arsenal, while trying to figure out how time travelling granddad can get back to his wife in 1943.

Good film? What would make you say that?

Syfy’s track record is, as was said at the beginning, hit and miss. They have made some brilliant things, like Haven and Alphas, and then they also make things like … this. Granted, it’s not quite as bad as The Witches of Oz or Witchville, but it really isn’t good.

Nice to see Nick Lea again – and nice to see him being a nice guy, considering Krycek (The X-Files) was so delightful I cheered when he was taken out by a big explosion. Ryan Robbins is a TV regular, although he normally gets to do better productions than this, like Falling Skies. Malcolm McDowell must’ve either really needed the cash or just wanted to do some acting, any acting at all, or I can’t see why he’d be in this production at all.

The special effects were cheesy, the script wasn’t convincing, Gina Holden’s character should be courtmartialed for being a PR disaster. Instead of doing something a rational person would do, her approach to crisis management is “IF WE EXPLODE IT, IT WILL GO AWAY”. Well done, I’m sure your superiors will be thrilled to know you’d nuke a big warship in the middle of a city and take every living creature with it in the blast because that will obviously be so much easier to cover up than why the hell a big warship suddenly materialised in a skyscraper. It just doesn’t make any sense.

Kudos to Emilie Ullerup’s granddaughter character for being sane, even though she’s very quick to believe the handsome fella in the 1940s uniform is her grandfather.

“Hi honey, it’s me!”
“Who are you?”
“Your grandfather.”
“But he disappeared in 1943. And you’re … like … young? That’s impossible!”
“Yeah, had a bit of an accident with a device that transported me through time, apparently, but I’m here now. But it’s really me, honest.”
“Okay, yeah, that sounds perfectly reasonable. I’d better hide you from the bad guys.”

Eh. No thanks. As much as I love to read the stories in books about the paranormal and thought this would be an interesting film to see … it wasn’t. I think I’ll stick with the nefarious Agent Krycek instead, even though I still hate his guts.

4 thoughts on “The Philadelphia Experiment (2012)”