The War of the Worlds – Alive on Stage! The New Generation

Jeff Wayne’s Musical Version of The War of The Worlds – Alive on Stage! The New Generation is coming to the big screen for the first time. Filmed in front of a sell-out audience at London’s O2 Arena on December 15, 2012, Alive! is a stunning musical multi-media extravaganza based on H.G. Wells’ dark Victorian tale of a Martian invasion of England.

The show features the hit singles The Eve of The War and Forever Autumn performed live on stage by 45 musicians conducted by Jeff Wayne.

The Squeeze has the CD with the songs from the musical (although the disc seems to have gone missing when I last checked), and we’ve been wanting to see the show on stage for some time. The ticket price has always put us off, though – £65 per person – and we’ve questioned whether we’re really that bothered. When our preferred multiplex cinema announced they were showing a filmed version of it on screen, for £12.50 (£10 for Showcase Insiders), we thought it sounded like a great idea. So it wasn’t live, but hey, at least it would allow us to see if it would be worth paying out £130 next time it’s in town.

Luckily, we can now say that we’ve saved ourselves £110.

The story is based on HG Wells’ Victorian tale of Martians invading the Earth, killing everyone in their way, and finally succumbing to puny little bacteria mankind has evolved a resistance to over the millennias we’ve been around.

It’s August 1898 (the cravat era! :D) We follow a journalist (Liam Neeson), who tells us the tale from the safe distance of a pre-recorded performance. It’s cleverly done with “3D holographics” or whatever it said at the beginning – it really looks a lot like he’s there on stage on occasion, even though he isn’t! He tries to survive and be reunited with his fiancé. Whenever he’s required to vocalise his innermost thoughts through song, Marti Pellow comes on stage to sing in his stead.

There are no more than seven actual actors on the stage throughout the show, rarely more than two at the same time. The rest of the action takes place on screen, which is what we both found lets the production down, and while the first act seemed to drag on while the second act was better. To have people on stage makes a very big difference. The first act is mainly Liam Neeson’s pre-recorded acting on screen and Martians that look like they could be green, slithering relatives of the Ood. Occasionally, one of the other actors come out and interact with the journalist, but most of it is on screen, which makes it much more difficult to relate to or to care about. Even when there’s a great 80s rocker style voice in Will Stapleton as “the voice of humanity”.

The second act, on the other hand, we get the reverend (Jason Donovan) and his wife (Kerry Ellis) singing about how all hope is lost – or maybe it isn’t. The Artilleryman (Ricky Wilson) who put in a brief appearance in act one comes back to deliver his spectacular vision of a brave new world, and finally, there’s something that we can actually get into. Actual people. On stage. Not just a band and a string orchestra playing, but actual acting. 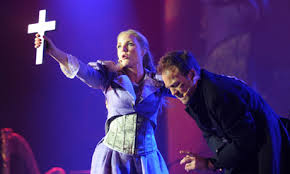 While the visual impact is of course going to be bigger when you’re there in the actual audience, it still didn’t feel as if we had actually missed much by watching the DVD instead, albeit on a big cinema screen. In fact, seeing it like this, we got close-ups of the actors, the musicians and the conductor, which we wouldn’t have had sitting in the ice arena.

One of the things we got to see in detail because of the filming is everything that’s shown on the screen in the background. Most of that are computer graphics that wouldn’t have looked out of place on shows like Babylon 5 in 1995. For modern day, though, you really wonder why the 3D rendering isn’t better – especially considering the general quality of everything else in the production.

Another problem with having a lot of the narrative on screen is that you get a bad case of “telling” instead of “showing”. Perhaps not the best use of words considering the visual medium, but bear with me. The reason the Orson Welles’ radio adaptation was so successful, is that the mind is capable of conjuring up worse horrors than a film-maker could ever show us. That’s why horror films work best when you don’t see the “horror”, and as soon as you see the thing that scares you, you just go “well, that’s not half as scary as what I had imagined;  bored now”. Fragile is a good example of this. I was hiding behind a pillow until they finally showed the baddie and that deflated the mystery balloon completely and all of a sudden, it just became kind of … lame.

The Martians and the tripods would have been a lot more menacing if you hadn’t seen them in such detail, and so often, and for so long. There was a tripod on stage for most of the show! We were told about how horrifying the attacks and the Martians and their tech all were … because it was right there on screen with a voiceover. There was nothing left to the imagination.

So basically, it was a long show full of good music, with most of the events pre-recorded and shown on a big screen, as opposed to acted out on stage. If anything, The War of the Worlds isn’t so much a musical as a multimedia-enhanced concert with occasional acting thrown in because it probably should have actors on stage at some point if it’s really meant to be a musical. But yeah, most of it was like computer graphic extravaganza music video – with musicians on stage. And to be brutally honest, I’d rather get the CD soundtrack and listen to that than pay an arm and a leg to see it live on stage. Even with Liam Neeson in a cravat.

But over-all, we both expected more, and next time it’s in town, we will not consider getting tickets to see the show live. Even if the music’s great, and the singing very emotionally charged. But as a show … it’s just not really working as a musical, especially not on DVD, and I wish that it did.