Ahh, we’re spoiled for choice all of a sudden! 2011 is apparently the year to really be a Thomas Anders fan. 🙂 First, the release of album Two by Anders | Fahrenkrog back in June, then Hits & Raritäten came out on 9 September (review to follow soon), followed by the long-awaited release of Strong outside Russia on the 18th. Granted, “only” as an MP3 album, but I don’t care. Main thing is that it’s finally available. Which is really ironic, because only today, I received the Oriflame edition, recently ordered from someone on eBay as it was the cheapest place to get it. And then, I turn on my computer and find out that HEY, GUESS WHAT? D’oh. 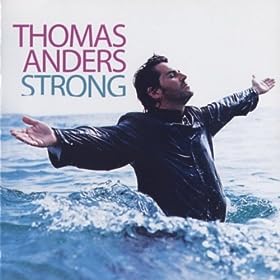 Went straight to Amazon.de, and got a message about geographical restrictions. Was about to have a hissy fit until I remembered to check Amazon.co.uk and there it was – and as it’s on the UK site, it means my gift certificate balance is available = free stuff!! Actually, I was looking for the tracklisting for Strong in order to start drafting the review, when I ended up comparing the releases and then stumbled across the MP3 edition. As it turns out, I shouldn’t have bothered with the one I got because it’s MISSING TRACKS. Goshdamnit.

Third, and this is perhaps the most interesting one of them all, is that tomorrow – or rather, today – his biography comes out: Thomas Anders: 100 Prozent Anders (Thomas Anders: 100% Different), which is unlikely ever to be officially translated into English. My German really doesn’t go anywhere near far enough to read it, and the prospect of typing it all up to run through Google Translate … I’ve got shit to do, you know? Machine translations of German-into-English doesn’t flow very smoothly either. Just trying to read bits about the novel came up with stinkers like this:

Separated in the summer of 2003, the duo – but since then only while others wrote about Thomas Anders and talking, fell silent, the singer – making music: last year alone he earned gold and platinum.

You what now? Maybe Yoda reading it aloud you imagine, make more sense it will.

If the hackneyd translation of a review with excerpts is anything to go by, it would be a must-read for all Thomas Anders and Modern Talking fans. He talks about being really embarassed at 16 when he got the headline of never having kissed a girl, how the whole NORA necklace thing was a joke and the truth about Modern Talking. Dun dun DUUN! From what I’ve heard, Dieter Bohlen tried that in his autobiography a few years back … and got sued for slander. Anders isn’t out for revenge, however. And the version he gives of “zhe greatest composer since ever in Germany” is chillingly like reports told by others previously:

He’s just a total macho. I’m under the impression that in his eyes, women must be beautiful and slim, otherwise they need to shut up. He is a “repeat offender”, every time it was the same pattern: first he recommends the girls, limit their dealings with their parents and friends, then he advises them to leave the old phone. She will receive a new one that he controlled and then get the breasts done …

(That’s me trying to make slightly more sense out of the automatic translation.) So no real surprises there, then. Just genuine creepiness. ICK, Bohlen! That’s all I have to say! Not to mention THANK YOU for actually being a really decent human being, Thomas. That’s one of the things I really love about you, and why you have my respect. (Not that he’s reading this, but if he was: Remember me? *waves*)

Anyway. Two music releases in the same month, three if you count releasing No More Tears on the Dancefloor as a single, and then an autobiography to boot. I’m not one for reading autobiographies, especially not in languages I don’t actually know much of, but for this one, I’m willing to make an exception.

One thought on “Thomas Anders rules September, and here’s why!”