Stalking the TV channel Yesterday’s website in order to find out if/when they’re going to show The Glass Virgin. They always seem to be showing Catherine Cookson adaptations, after all. (Wondering why you should see it? Brendan Coyle à la 1995. “OMG” doesn’t quite cover it.)

Also, I see now that he played Michael Collins in a 2001 miniseries called Rebel Heart. Brendan Coyle with an Irish accent playing Michael Collins – this is almost too good to be true! And it is, sort of. The bloody thing isn’t available on DVD! HOW RUDE!! (You can get a used VHS from £25 but that’s a bit much.) Ohh, although it’s on YouTube. Hooray! That’s my evening sorted! 😀

Erm, anyway, before I digressed, I came across a test: Who’s your ideal literary hero? Can’t resist a challenge like that!

Here’s what mine said:

Your closest match is Richard Sharpe

Aren’t most men such pushovers? Well, you clearly think so – as your ideal man is rough, ready and up for adventure. You’re not out for perfection – you want someone unpredictable, sometimes arrogant, sometimes sweet, but always exciting. And that’s why you need Richard Sharpe, the swashbuckling Napoleonic hero dreamt up by Bernard Cornwell. He’ll shoot your ex, plonk you on his horse and ride off into the sunset – though he might not wash as often as you’d like. 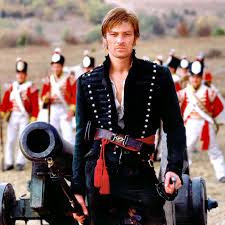 The test is here: Yesterday: Who’s your ideal literary hero? Let us know how you get on!